Construction input prices declined 1.7 percent in December on a month-over-month basis yet are 3.5 percent higher than the same time last year, according to an Associated Builders and Contractors analysis of U.S. Bureau of Labor Statistics data. In December, nonresidential construction prices fell 1.6 percent but are up 4.1 percent compared to one year ago.

Among 11 subcategories monitored in the data, six declined in price in last month, with the crude petroleum category registering the largest decrease at 3.7 percent and 11.1 percent year-over-year. The decline in input prices occurred despite a massive run-up in natural gas prices of 64.3 percent.

“Today’s data release should be viewed as good news for contractors,” said ABC Chief Economist Anirban Basu. “For months, there has been growing concern that the combination of rising wages and construction input prices would steadily hammer away at profit margins. While that remains a concern, particularly considering the ongoing shortage of skilled construction workers, the fact that input prices have moderated—especially as they rose rapidly in 2018—should be viewed positively from the perspective of contractor earnings performance.

“There are many explanatory factors involved, including a softening global economy,” said Basu. “And while a softer global economy is good news from the perspective of inflationary pressures, ultimately, this will result in weaker U.S. economic growth. In addition, while there is no consensus among economists about the prospects for an economic downturn later this year or in 2020 or 2021, most agree that economic growth will be weaker going forward compared to 2018.

“It is conceivable that materials prices will continue to decline, particularly if tariffs imposed on certain items like steel and aluminum are removed,” said Basu. “Iron and steel prices are up nearly 15 percent on a year-over-year basis, and steel mill product prices are up nearly 19 percent. On the other hand, a recent decline in the value of the U.S. dollar may translate into firmer materials prices over the very near term.” 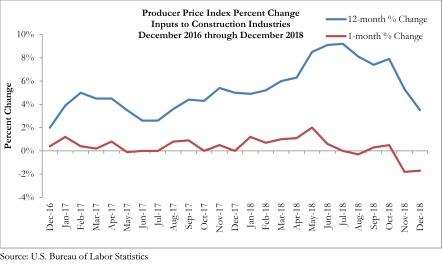 For more great info from ABC, do not hesitate to click this link.