Both nonresidential and overall construction input prices increased in September, with natural gas and crude petroleum prices bouncing back, according to analysis of the U.S. Bureau of Labor Statistics (BLS) Producer Price Index released by Associated Builders and Contractors (ABC). The BLS data show that nonresidential input prices expanded 0.3 percent on a monthly basis in September, and overall construction prices also rose 0.3 percent on a monthly basis after declining 0.2 percent in August.

“The rise in material prices both on a monthly and year-over-year basis is not good news for U.S. nonresidential construction firms,” said ABC Chief Economist Anirban Basu. “For roughly two years, declining energy prices had wrung much of the inflation out of the economy, allowing interest rates to remain low and the Federal Reserve to remain fixated on guiding the nation toward full employment. Energy prices are no longer falling. Moreover, wage and healthcare inflation are building, which could drive interest rates higher next year. That scenario is not good for real estate valuations and nonresidential construction.

“Additionally, many contractors note that buyers of construction services continue to relentlessly pursue lower construction charges, even though many contractors are quite busy,” said Basu. “Labor and other costs are going up, and this has a tendency to squeeze margins. To the extent that materials prices begin to rise more forcefully, this could further compress nonresidential construction margins. 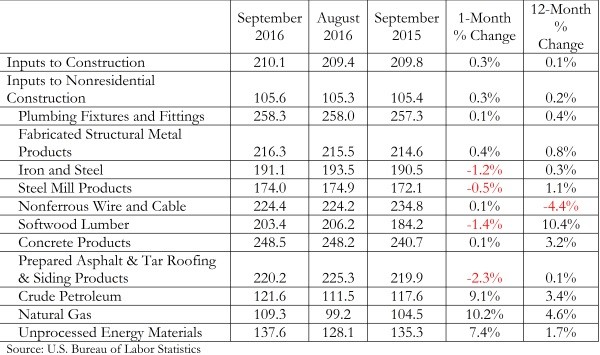 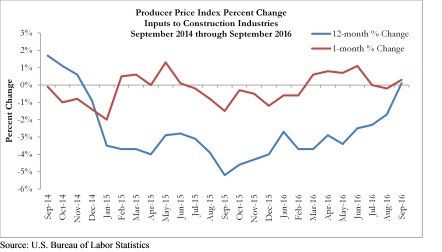 For more info on ABC, click on this link. It’s totally clickable, clicky.