Putting ‘Gravity’ to the Test 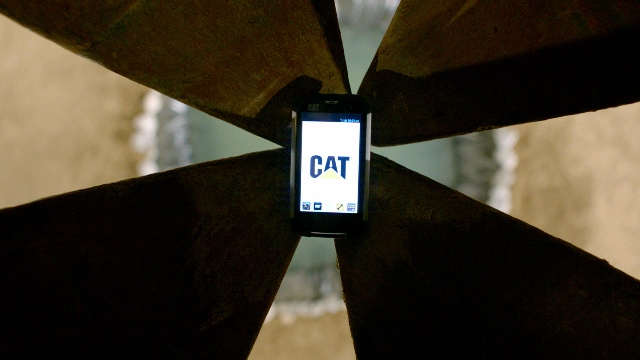 Before the track loader rolls over it, a B15 is put into a free fall, landing in a 5 ft deep pool of water, where it soaked for 10 to 15 minutes.

What do a 277D multi terrain loader, a PL83 pipelayer and the engines powering many of the crab boats featured on the Discovery Channel’s “Deadliest Catch” have in common? One word, four syllables … Caterpillar.

With such a varied and broad product line, Cat’s marketing strategy needed an all-encompasing message. In 2012, the company decided to showcase that no matter what it makes, its products are “Built For It” — the compay’s rugged corporate slogan. Last month, Benjamin Media Inc., publisher of Compact Equipment, Utility Contractor and North American Oil & Gas Pipelines, received an exclusive sneak peek of a new piece in the Built For It campaign. It’s called “Gravity,” and it’s the next video in the Built For It trials YouTube series. We spoke to the team behind the video to get an idea of this big new marketing strategy at Cat.

“Our vision is for everyone — customers, prospects, stockholders, employees and suppliers — to see us as a well-grounded company that is in touch with our markets and the communities where we live and work globally,” said Diane Lantz-Rickard, global marketing manager for Cat. “We are adaptable and have the right tools to make our customers successful.”

That viral video campaign kicked into high gear in April when the company showed the world what a Godzilla-sized version of the popular Hasbro game Jenga looked like. The result was the “Stack” video, which as of May 15 amassed more than 2 million views on the Cat Products YouTube Channel. 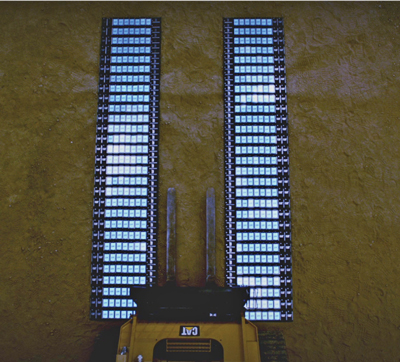 The “Stack” video and the Built For It trials are the product of brainstorming between Cat’s internal brand marketing team, its equipment operators at the Caterpillar Demonstration and Learning Center in Edwards, Ill., and the marketing firm of Ogilvy & Mather. The combination has given Cat’s advertising campaign a more mainstream consumer appeal.

“We have purposely selected items that anyone can relate to for these videos. We want to connect with prospects and current customers for sure, but the videos are also intended to energize our employees and brand advocates across the globe,” Lantz-Rickard said. On May 6, “Gravity,” the next video in the campaign, hit YouTube and takes the Built For It mantra to an unexpected spot in the Cat roster — cellular phones — namely the Cat B15 smartphone, available since March 2013.

“The Cat B15 smartphone is the most robust device in the market today,” said Adrianne O’Hare, brand account manager for the Bullitt Group. “The Cat B15 is the perfect device for anyone who needs a rugged phone that will stand more than a few bumps and scrapes whether it’s at work on a construction site or when out fishing on the weekend.”

“The Cat B15 smartphone is for use in harsh environments with a large 4-in. multi-touch screen with wet finger tracking. The phone is also dustproof and scratch resistant all at the same time,” O’Hare said. “All the functions of the Cat B15 have been combined with the standard of the Cat brand for a lasting, industry-leading and high-quality design.”

Those who operate Cat equipment do so in some of the harshest environments known to man and the B15 can go with them. The phone’s impact and scratch resistance and dust and waterproofing come courtesy of an aluminum body, toughened casing and Corning Gorilla glass screen. This means the B15 is IP67 certified and military standard 810G rated to survive a fall from 6 ft and take up to a 30-minute soak in 3 ft of water. Other specs include a 2000mAh removable battery with talk time of up to 16.3 hours, a 5-megapixel camera with video capabilities, Bluetooth and Wi-Fi capable operating on the Android version 4.1 (Jelly Bean) platform with a dual core 1 GHz processor. That means you can use your favorite Cat app(s) from the Google Play Store and play a quick game of Angry Birds in your downtime.

Customers can purchase the Cat B15 at Rogers Communications in Canada and at catphones.com in the United States.

Watch “Gravity” (just zap the QR code below), and it’s clear that the B15, though one of the smallest items in the Cat inventory, is as Built For It as they come. The video opens with a Cat 277D multi terrain loader gripping the phone in its bucket and hoisting it almost 35 ft in the air. The bucket lets go and the B15 is in for a free fall into a 5-ft deep pool of water, where it soaked for 10 to 15 minutes.

“As you can imagine, this is a true test for a phone when you hear of other phone brands being ruined just by sitting on a wet counter top,” Lantz-Rickard said. “A phone that can stand up to being subjected to a test like this appeals to our customers and service technicians who work in very rugged and sometimes wet conditions to conduct service on Cat machines and engines. They need to be able to access information and not have to worry about their phone.”

Impressive as that may be, the phone was retrieved and then dropped again, this time from approximately 10 ft to the compacted surface below. Retrieved a second time, the phone was placed in a grouping with 599 B15s. The two tracks of phones, with a retail value of more than $217,000, were then run over by the 4.6-ton 277D. The question is: Did the B15 survive? Was the operator able to phone home? Visit tinyurl.com/ceunbound-B15 to watch “Gravity” and find out for yourself. While we won’t give away the ending, we can offer this behind-the-scenes info you won’t see by watching the video:
■ Crews used Cat equipment to dig the pool.
■ It took approximately six drops into the water (each at a 10 to 15 minute soak) to get all of the camera angles.
■ To capture the footage, the crew used three primary cameras and 12 Go Pro cameras.
■ It took a 175,000-watt Cat generator to provide the power for the lighting after it was found that the facility lacked the required amount of juice.
■ Like the “Stack” video, there were a few skeptics among the production crew.

As for the future of the Built For It video series, Lantz-Rickard had this to say, “The Built For It platform is truly a change in how we market going forward. With a product line as broad as Caterpillar’s we are getting plenty of new ideas from just about everywhere. We can commit this is not a one-time event.”

Mike Kezdi is a contributing editor to Compact Equipment, based in Brecksville, Ohio.

Tags: Built For It, Cat, Caterpillar
Most Popular Posts