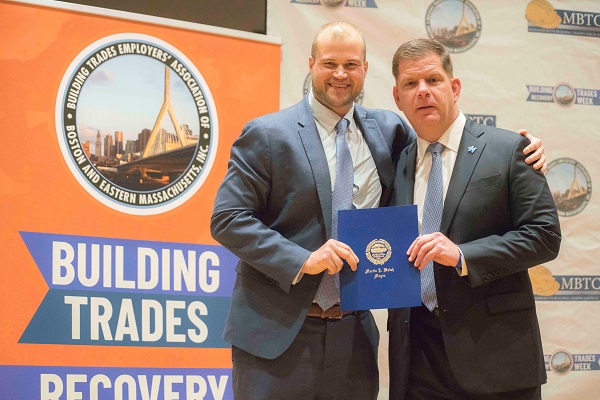 Construction is the hardest-hit industry in the opioid crisis, with 150 deaths per 100,000 workers annually, according to the Massachusetts Department of Public Health.

The first-of-its-kind conference was spearheaded by the Building Trades Employers’ Association (BTEA). More than 25 unions, contractors and other organizations, representing the majority of Boston’s construction workforce, signed on as sponsors.

The goals of Building Trades Recovery Week are to increase awareness and understanding of opioid use, abuse and addiction, educate participants on how to recognize substance use on the jobsite, hear from experts on best practices for prevention and recovery and enable participants to voice their own concerns and questions.

“We need to take proactive steps to make sure that the number of those lost to this disease plummets, because 150 deaths per 100,000 workers is unacceptable,” Tom S. Gunning, Jr., director of labor relations at the Building Trades Employers’ Association said. “This conference is just the first step towards winning our battle against the opioid crisis in the building trades and beyond, and I truly believe that by working together to create positive change in our industry, we can — and will — make a meaningful difference.

Mayor Walsh, who gave formal remarks at the conference, is responsible for coordinating citywide recovery strategies, working in tandem with building trades organizations like the BTEA. Walsh shared details of his own recovery and the support he received from the building trades community.

“It’s important what the building trades and the Employer’s Association are doing today. It’s about helping people,” Walsh said. “Now, the people who need the help most aren’t in this room tonight. And we know that. So, what we’re asking you to do, is when you leave here, to make sure to connect with people on the job who do need the help.”

The keynote speaker during the first day of the weeklong conference was former Celtics player Chris Herren, whose book “Unguarded” described his experience of recovery. He has also launched The Herren Project, which recruits social workers to match addicts with the support they need. He urged construction workers struggling with opioid misuse to seek help for a better future.

“The bad days become the blessings in recovery and the beauty of living life in sobriety,” Herren said. “It allows you to find a silver lining in your saddest stories. You become grateful for your worst moments.”

The week will culminate in a 150-second stand-down honoring the 150 construction workers, per 100,000, who die from this disease every year. Mayor Walsh, the BTEA, and Building Trades leaders will join 75,000 workers Friday, at job sites across the state, as they all stop work to recognize the toll the opioid crisis has had on the industry.