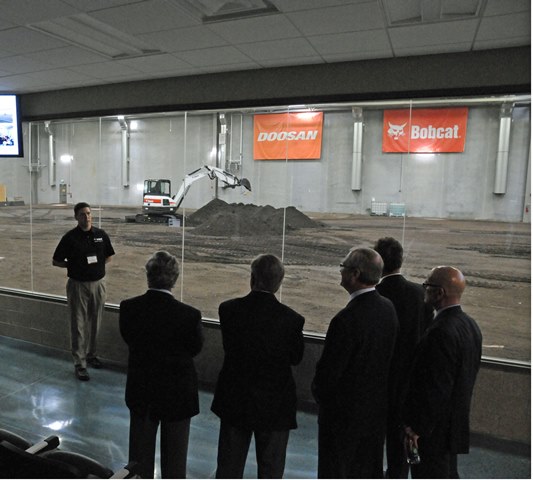 Office and lab space, indoor and outdoor machine operation areas and classrooms are some of the highlights of the recently opened Bobcat Co. and Doosan Acceleration Center.

The facility will be home to 175 individuals tasked with initial design, prototype engineering, prototype manufacturing, computer simulation and testing of ideas and concepts. The Acceleration Center becomes a key engineering facility for all Bobcat compact equipment distributed globally, and it will help serve some of Doosan heavy equipment’s research and development needs for the North American market.

The $28 million project involved expansion of an existing building to include office and lab space, classrooms and demonstration areas, and both indoor and outdoor machine operation areas. The facility has two stories and 190,000 sq ft under roof, with an additional 22 acres of outside test and product development space.

A collaborative open office environment is equipped with modern devices, tools and software systems that expedite leading-edge engineering, and product and process development.

“We have momentum,” said Rich Goldsbury, president of Bobcat Company and Doosan, North America. “We are investing in our innovations and technologies, and in our facilities and our people. That’s what this particular facility is all about: momentum and acceleration. Bobcat will continue to be an unstoppable force in the industry, and Doosan will continue to grow into a premier heavy equipment brand in the North American market.”

The company broke ground on the Acceleration Center project in May 2013. The entire project — including the original building built in 2005 — capped a total $43 million investment by Bobcat and Doosan in the Northern Plains Commerce Centre in Bismarck. Bobcat Company also has an attachments production facility in Bismarck, and its manufacturing, production control and logistics group has been there since 2012.

“We built the compact equipment industry and continue to set standards, and reach milestones no other manufacturer can match — and that was all accomplished right here in North Dakota,” Goldsbury said. “We are very proud to call North Dakota home, and we’re proud to continue growing our engineering and innovation foundation in Bismarck.”