Equipment rental industry revenues in the United States have been growing at a rate of at least three times that of the general economy over the past few years, and it doesn’t look like that pace will slow down anytime soon. In 2015, the equipment rental industry in the United States is expected to show significant growth with combined revenue of the three segments — construction/industrial, general tool/homeowner and party/special event — increasing 8.1 percent to reach $38.5 billion, according to the American Rental Association’s (ARA) latest forecast from the ARA Rental Market Monitor.

Further economic data will be released by ARA at The Rental Show 2015 in New Orleans, scheduled for Feb. 22-25 at the Ernest N. Morial Convention Center. “The strong economic growth trend we’ve seen over the past few years will continue,” says Christine Wehrman, ARA executive vice president and CEO. “We track the equipment rental market in the United States and Canada on a quarterly basis via information from IHS Economics data, which can be viewed through the ARA Rental Market Monitor subscription service. This past year we have made data available at the Canadian provincial level, now providing a full complement of industry outlook data for North America.

“This valuable data allows us to forecast rental revenue with a five-year horizon using econometric modeling. We’ve been partners with IHS Economics for nearly a decade and this economic information has been invaluable for rental and manufacturer/supplier members. Rental businesses use it to forecast rental revenue, make personnel decisions and obtain financing from their banks. Manufacturers and suppliers use it to forecast factory throughput, understand where sales opportunities exist and determine sales revenue projections from the rental channel.”

“The U.S. equipment rental market is expected to continue its upward trajectory and show strong growth through 2018. The 2014 to 2018 compound annual growth rate [CAGR] of 4.2 percent is projected for real total construction, with real nonresidential construction growing 2.8 percent and real residential growing 6.4 percent. This will drive rental revenue growth in the construction and industrial equipment segment and the general tool segment,” according to the economic analysis from the ARA Rental Market Monitor.

“Construction spending is on the rise with significant growth expected in the commercial and residential construction markets, and clearly the energy sector continues to be an interesting growth market for rental in North America,” Wehrman says. “At the same time, the equipment rental industry continues to innovate and find ways to expand its footprint. The benefits people have realized by renting equipment are being applied to more products and services in an unprecedented way. The industry is experiencing more than just a trend. It’s a shift in the way business is done. The benefits of renting equipment have become abundantly clear, such that it’s now understood to be a great way to manage and operate a business. Renting simplifies people’s lives, so they can focus on getting their work done in a smart, efficient and more economical manner.” 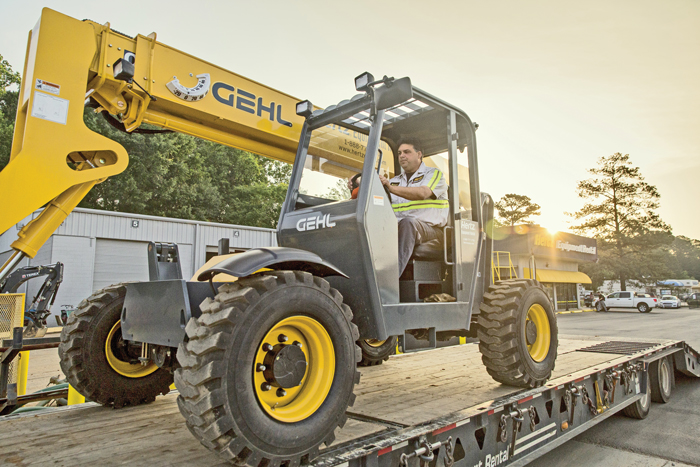 The latest forecast released by ARA , shows the overall expected growth of the equipment rental industry each year from now through 2018 exceeding the 7 percent growth rate seen in 2014.

It also is expected that rental companies in the United States will continue to invest more than 30 percent of their revenue in new equipment over the next 5 years. Total investment, according to the ARA Rental Market Monitor, is projected to reach $11.9 billion in 2014 and grow to nearly $15.5 billion in 2018. Scott Hazelton, managing director, IHS Economics, the forecasting firm that compiles data and analyses for ARA and the ARA Rental Market Monitor, says the equipment rental industry’s growth was fairly steady in an up-and-down economy in 2014, and he expects that equipment rental companies will continue to benefit from unconventional energy developments this year and beyond.

“To be a bit simplistic, the oil or gas sits in an underground pool. Drilling involves tapping that pool and then extracting the material.” Hazelton says. “With unconventional energy, the material is trapped in pockets of rock within the field. It would not be economic to drill into each of these small pockets, so another approach is required. What is done in these cases is to inject a water-sand mixture into the ground to crack open the pockets of oil or gas to allow it to flow. The technical term is hydraulic fracturing, which has become more commonly known as fracking.”

Injecting the water and sand requires more pumps than on a conventional drill site, and there is generally a need to transport the sand and water to the site. This is commonly done via road or rail and requires equipment to load and offload the fracking materials.

“The decision to rent equipment in unconventional energy is similar to that in the general economy. Time is money, especially working in adverse terrain, often in adverse weather, with workers commanding high wages. A rental company can offer the logistics to have equipment at the site when needed and the ability to maintain that equipment in operating condition or bring in a new piece of equipment if necessary. Renting lets unconventional producers focus on what they do best, leverage their money and talent, earn better profits and supply more energy to the U.S. economy.”

Despite declining gas prices, Hazelton says production of oil from unconventional wells can be profitable at prices less than $75 per barrel. “There are some plays that can be profitable at $35 per barrel. Also, experience with the technology has led to innovations that have lowered the cost of production and lower oil prices will stimulate further efficiencies,” he says, adding that renting equipment is one way these oil producers can reduce overall costs.

Wehrman says those in the energy sector also recognize what renting equipment can do for their respective businesses. “As an industry, we are prepared to deliver the right equipment at the right time in order to maximize the uptime that the energy sector demands,” she says. “The North American energy sector always has understood the value of equipment rental, however, now the geography has expanded greatly. The expansion of unconventional shale oil and gas has created new avenues for equipment rental upstream, midstream and downstream at the refineries. The growth of the sector is moving at a fast pace, which suits our industry perfectly.”

Hazelton further explains that relatively steady growth for both construction and equipment rental are indicative a new type of economic reality versus the boom-and-bust cycles of the past, at least for now.

“Economic cycles have not been eliminated,” Hazelton continues. “There will be a recession again — we just do not expect one in the foreseeable future. This recovery has been slower than previous ones. We are just now approaching the level of employment in the economy at its prior peak about 7 years ago. Even with a strong outlook for commercial construction, we do not even achieve prior peak activity within the next five years. There is nothing in recent economic data or in the economy’s most likely trajectory to suggest unsustainable growth in any major sector. As such, the potential for a boom-bust cycle is extremely small. We expect the economic recovery to continue at a prolonged, sustainable pace

Tom Hubbell is the ARA vice president of marketing and communications, based in Moline, Ill.