Winter Wheel Loaders: Transform Your Machine for Snow Removal with the Right Prep and Attachments 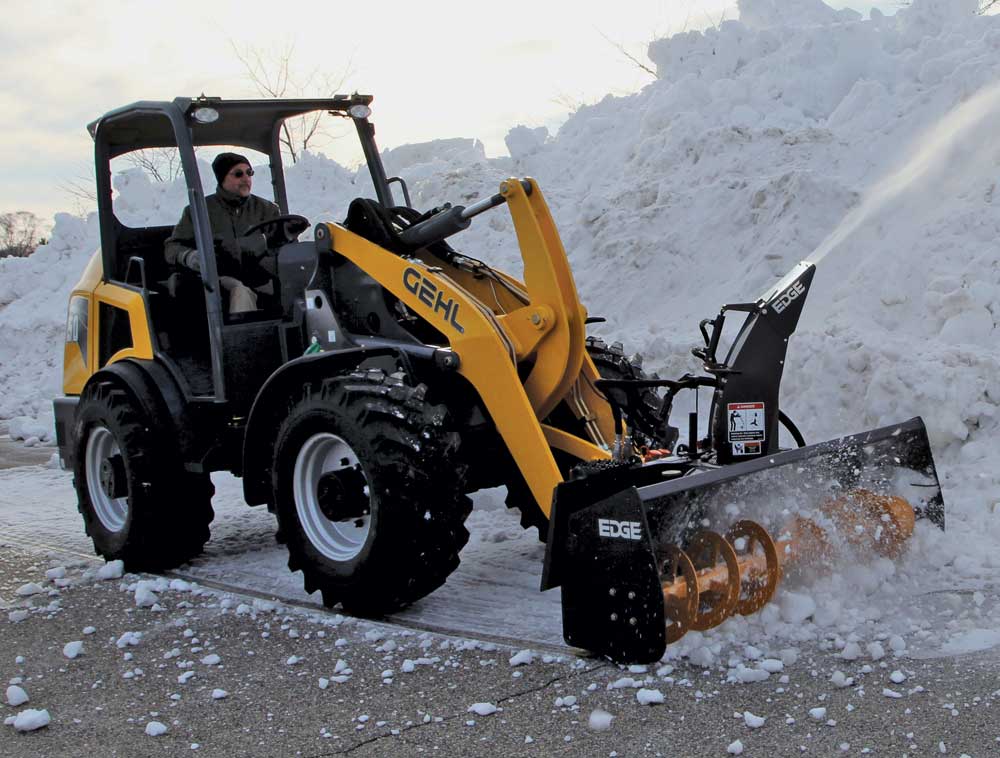 Compact wheel loaders are making waves here in North America. Thanks to their size, comfort, maneuverability and safety, these machines are not only perfect for the jobsite but in snow removal applications too. So just because the weather takes a turn, it doesn’t mean your operations have to stop.

“When comparing wheel loaders to other types of compact equipment, such as skid steers or track loaders, its benefits include a longer wheel base and a more comfortable cab,” says Frederik Crul, global product manager for wheel loaders at Manitou Group. “Comfort and visibility are quite important, especially since the operator will spend hours inside the cab. Wheel loaders allow the operator to sit tall and have good, 360-degree visibility all around.”

Prepping for the Work

Although a compact wheel loader is a prime candidate for snow removal, you probably shouldn’t just roll it into the cold and expect it to perform to its potential. It takes a little prep and the right attachment to get the machine ready for winter work.

“In order to prep your compact wheel loader for snow removal, it’s important to make sure that you have some vital accessories and equipment,” says Mike Stephan, president and co-founder of Kage Innovation LLC. “Make sure that your machine is equipped with a steer wheel knob, so that the operator doesn’t have to palm the steering wheel all night. Also make sure that there is adequate lighting, and that all of the headlights, flashers and warning lights are working and intact. A chain or tow strap is essential, since you never know when you might get into a bind or be in a position to help a fellow worker out.”

Protecting the machine from the elements is always a good idea. Since the compact wheel loader — and its metal components — will be exposed to salt on the road, it’s important to wash the machine every day and apply products such as a spray-on corrosion inhibitor. Snow tires aren’t a necessity; however, Stephan points out that some operators opt for siped tires to aid in winter work.

Next up is outfitting the compact wheel loader with the right attachment for snow removal. Since no two projects are alike, there are plenty of tools to choose from including snow plows, pushers, blades, brooms and more. Snow plows and pushers are popular choices in snow removal because operators can move large volumes of snow at a fast rate for big parking lot cleanup. 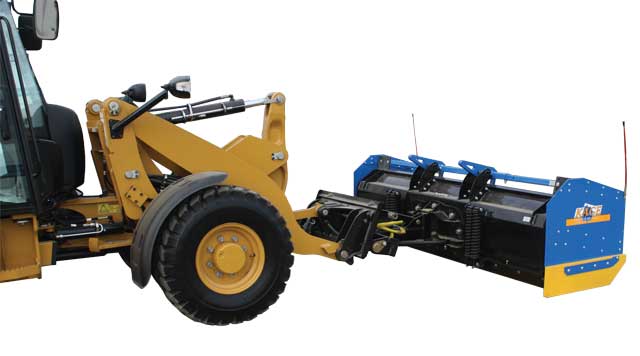 According to Mike Stephan, president and co-founder of Kage Innovation, it’s critical that any snow plow or pusher an operator chooses is equipped with a mechanical float, allowing the plow to move up and down over contours in the pavement.

“Typically, compact wheel loaders are equipped with anywhere from 10- to 14-ft snow plows or pushers,” says Stephan. “Rule of thumb, however, is to look at the site that the unit is on, and what kind of flexibility you need the machine to have. If there are areas where you need to be more maneuverable, you may want to downsize the plow slightly in order to have a machine that is versatile, rather than just a brute force monster.

“It is critical that any snow plow or pusher that you choose be equipped with a mechanical float, allowing the plow to move up and down over contours in the pavement — independent of the machine it’s attached to,” he continues. “Without float, the wheel loader will lose steering when the plow rides over humps, or the plow will leave snow in the dips. The float built into the loader’s boom does not operate like the mechanical float on a plow frame and is useless for plowing snow.”

Edge, distributed by Manitou Group, offers an oscillating snow push that follows the contour of the pavement a wheel loader is clearing. This is great for maneuvering over obstacles such as manholes.

“If you have a manhole cover where it slopes down, this plow will oscillate eight degrees left and right depending on the contour,” says Ron Peters, product manager for Edge. “This is all mechanical, there’s no hydraulic on it, so the push does it all automatically.”

V-blades work great for sidewalk and parking lot cleanup, because you can put them in a couple different positions.

“You can angle the snow left or right or put it in a V-position if you’re just going down the sidewalk to push the snow away,” says Peters. “The scoop position lets you take snow and remove it from a doorway entrance and push it off to the side so you don’t leave any behind.” 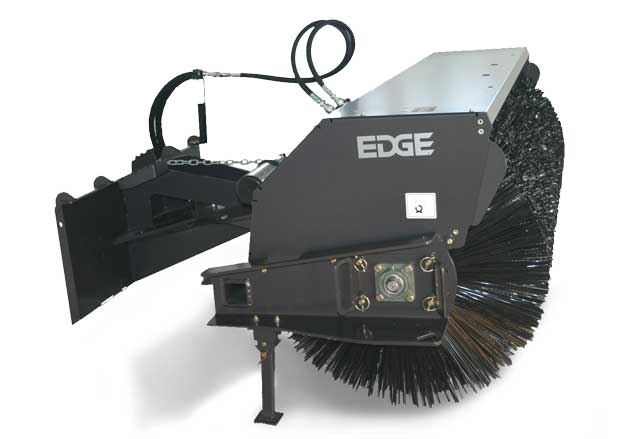 Angle brooms are ideal for removing 3 or 4 in. of snow and are generally used around buildings and for sidewalk cleanup.

Angle brooms are also a great option. Peters points out that the brooms are ideal for removing 3 or 4 in. of snow and are generally used around buildings and for sidewalk cleanup. He says, “An operator will want the broom to be a little wider than the machine so he or she is not driving over the snow and compacting it instead of cleaning it.”

Attachments aren’t just for the front. Moving on to the back of the wheel loader, snow removal companies can turn to salt spreaders for their operations. For example, Edge offers an electric spreader. Peters explains that the spreader allows operators to run a snow blower or plow on the front of the machine, clean the area and then flip a switch to start spreading salt on a parking lot.

Pam Kleineke is the managing editor of Compact Equipment.

Safety First: What to Know Before Heading Out in the Snow 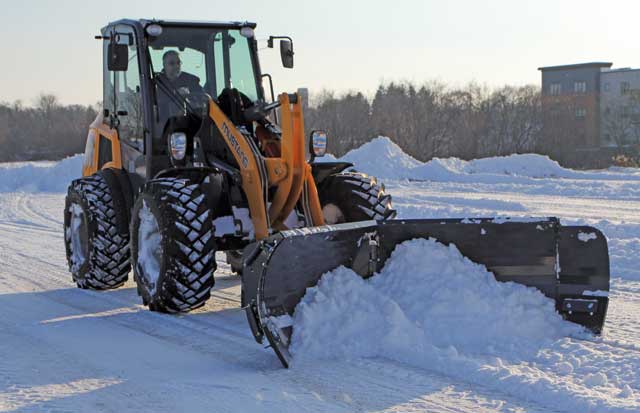 Sure, your machine may be ready for winter work, but are you? Although the operator’s manual is a good place to start for how to run the machine, wheel loader and attachment experts offer tips to keep you and the public safe.

“Safety is critical, and operators need to be aware of the large amount of articulation swing that are inherent with wheel loaders,” says Mike Stephan, president and cofounder of Kage Innovation LLC. “Being that compact wheel loaders are articulated, the front and back of the machine move laterally from side to side as the wheel is turned. This can cause problems if the operator is close to obstacles on one side or the other and decides to turn the steering wheel. Precaution needs to be exercised, especially when operating loaders with wide attachments.”

Compact wheel loaders are known for their visibility — which earns them major points for safety — but dreary winter work adds obstacles. Operators need to be aware of what’s going on around them, especially when working in the dark.

“You always want to know your surroundings,” says Ron Peters, product manager for Edge. “You want to make sure people aren’t right around by you. You should have your lights on — headlights, strobe lights and flashing lights — because a lot of this is done when it’s dark or early in the morning. You also want to know where your curbs are. There are some flags that can be mounted on the edge of a snow plow or snow push so you can see the edge a little better. One advantage is that you sit higher on a wheel loader, so you can see your surroundings better when you’re backing up. Backup alarms are helpful too.”