Hammer like A Pro: Breaker attachments for skid steers 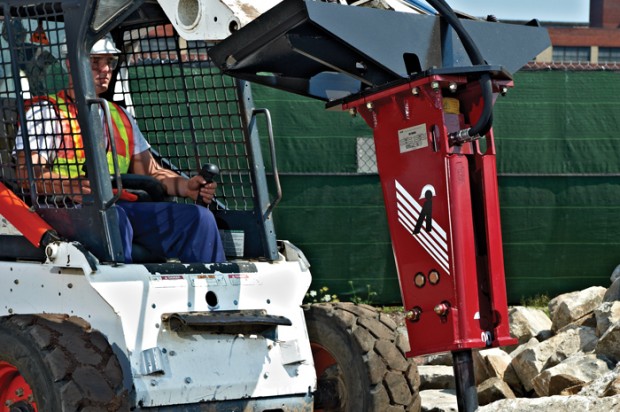 Operational Advice for Breaker Attachments from the Industry’s Top Experts

Cooks know you must break an egg to make an omelet. Similarly, contractors sometimes must deconstruct something before beginning construction. Remove a concrete pad in the footprint of a new residence. Strip out a rocky outcropping where landscaped rolling turf is envisioned. A popular choice for removing rock or concrete obstacles from a jobsite is a hydraulic breaker, or hammer, attached to a skid steer or track loader. This is a highly maneuverable and effective combination of tools. However, the combination can be problematic if an operator doesn’t know what he’s doing.

“Operators are key in the life expectancy of hammers,” says Scott Scholz, manager of service operations for Allied Construction Products. “Customers need to pick a brand that’s quality and learn to operate with efficiency. Prying, for example, is especially bad for the tool, while excessive cycle times are bad for the whole hammer. These are the things that our dealers try to teach our customers.”

With almost 75 years in the hammer business, Allied has learned to engineer breakers that last (take its gnarly, Compact Range (in-Series) hammers with their “non-breakable” trapezoidal tool, for instance), but even the best tools need knowledgeable operators to use them properly and efficiently. Violence is inherent in hydraulic breaking, and it begs an extra measure of operator attention. Putting an untrained operator behind the levers and joysticks of a skid steer-mounted hammer is a gamble, especially when manufacturers offer manuals and on-site training.

But even before considering an operator’s credentials, the first management decision is choosing the correct breaker for a carrier. If the attachment is too large or too small for a compact piece of equipment, problems will ensue. “Weight usually is the critical part in putting any breaker on a carrier,” says Greg Petherbridge, national sales manager at Chicago Pneumatic. “This is even truer when mounting on a mini excavator. You can tip it over if it is too heavy. Each breaker has a perfect carrier weight.”

By the same token, putting an undersized breaker on a larger skid steer can overpower a hammer, says Brian Bieller, vice president of business development at Atlas Copco Construction Equipment. “That can result in damaged mounting brackets, overheated hydraulic oil and decreased service life of the breaker. Contractors should work with their dealers and equipment manufacturers to properly size a breaker to an application.”

The rate of hydraulic flow that controls the speed of the piston is the other critical match-up when mating hammer and carrier. If you have a full 16 gallons-a-minute flow, you can get about 1,300 blows a minute. If the flow is only 12 gallons a minute, you’ll get maybe a thousand blows. All the shuddering blows and rapid piston movement produce heat, of course, with friction raising temperatures as high as 1,500 degrees Fahrenheit if a breaker is run too long uninterrupted. The heat build-up is aggravated when bushings are allowed to wear because of inadequate greasing; the result is misalignment, which produces more friction.

“A couple of main points to keep in mind are, one, that a quality grease is used and the proper amount of grease is applied,” says Scholz. “Hammers should be lubricated every two hours under normal working conditions.” Second, make sure the tool and bushings are within specs. Certain limits are required for the continued high performance of the hammers. When those tool and bushing limits are exceeded, it’s time for the replacement of either or both. Failure to do so can result in significant hammer damage.”

So lubricating key intersections on a breaker every two hours is a vital maintenance procedure. Petherbridge recommends a “chisel paste” that keeps working in 2,000-degree conditions. “If you use the right paste, you can get twice the life out of a hammer.”

Bieller specifically recommends a paste that “contains particles of copper and graphite that roll up like ball bearings between the tool steel and bushings to prevent metal-on-metal contact. The paste is also more viscous than standard lubricants, which allows it to remain between the steel and bushings and provide lubrication for longer periods.”

When operators see shiny slivers of metal on the tool that is a good indication to add more grease.

On the working end of the hammer, different tools can be affixed for different tasks. In each case, the piston powers the tool into the hard material and breaks it apart at its weakest point in a prescribed way. A chisel tool can control breakage because it shoots out pressure 180 degrees along its plane. A moil, which is a four-faced pointed tool, is less precise, sending energy in 360 degrees from where it strikes. A purely conical tool shaped like a round pencil is effective in punching holes, whereas a blunt tool just batters material until it is overwhelmed.

Because hydraulic hammers are only a periodic need for a contractor, the good news is that the attachment can be rented. The bad news is that rented equipment sometimes is abused, so a contractor must rent carefully. One safeguard is to rent hammers with automatic greasers.

Some manufacturers, including Allied, also guarantee a hammer’s chisel or conical tool against breakage. In fact, Scholz believes Allied’s Compact Range breakers “are the perfect rental hammers. They do not have to be greased, and they have an unbreakable tool. If a tool were to break at any time in its life cycle, it would be replaced free of charge.”

Operators err when they use a hammer’s tool to pry apart two relatively unyielding masses, or slip the tool under a rock or slab to flip it. These maneuvers put pressures on hammers akin to applying pressure sideways on a knee joint — never a good idea. The result can be misalignment of the hammer’s tool in its bushing area. “When that happens, the hammer inside cannot make solid contact with the tool steel, which results in less productivity and maintenance downtime,” Bieller says. 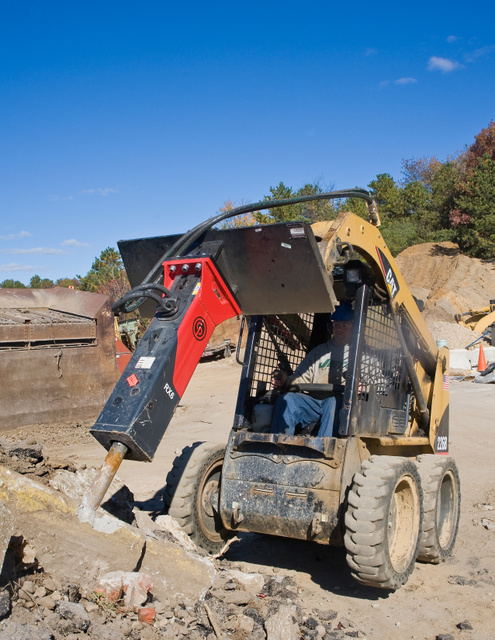 In the end, choosing a breaker attachment for a skid steer loader can be as simple as going with a favorite brand. Chicago Pneumatic breakers are hybrid hydraulic-nitrogen gas devices that Petherbridge says “will outperform a purely hydraulic breaker all day.”

To sum up, if a hammer and skid steer are sensibly mated, the correct tool is fitted in the hammer, maintenance procedures are understood and an operator is suitably trained, a good day’s work comes down to employing recommended breakage techniques.

• The correct approach is perpendicular. Whether the material being hammered is flat on the ground or more vertical than horizontal, the tool being driven into it should intersect it at a 90-degree angle. Any other approach lets the tool lose some of its energy through slippage when it strikes the surface. The whole point of hydraulic hammering is to frontally assault the material, not give it a glancing blow.

• Adapt to the mass and content of the material. If the object to be broken apart is of impressive mass, take a gradual approach by working near an edge. The energy being shot into the material will find the narrower segment of the mass and flake it off. If concrete material is reinforced with rebar, know that a moil probably will work better than a chisel, which can torque when it hits steel reinforcement.

• Don’t persist too long. “We tell operators to follow the 30-second rule when breaking apart oversize,” says Atlas Copco’s Bieller. “If after 30 seconds, a breaker doesn’t penetrate the material or create cracks, dust or fissures, an operator should move the breaker closer to the edge of the oversize or use a larger breaker.” Others suggest a 10- to 20-second maximum. Bottom line: Fruitless pounding heats up and breaks down a hammer.

• Avoid dry firing. If a breaker piston is fired with the tool in the air, the piston slams down on a more-or-less unresisting tool, which is not what it was designed to do. It is like swinging a hand-held hammer at an object and missing; the expended force can go dangerously awry. “It can cause significant damage within the hammer,” says Allied’s Scholz. “It is important to always put down-pressure on the tool before the hammer is fired.”

Various technologies have been employed by manufacturers to quiet the pounding machine’s operation and reduce the vibration that can shudder through the attachment to the skid steer operator. These include polyurethane damping and guiding elements in the piston housing, a shock absorber to lessen the feedback and fully enclosed percussion systems. The percussive equipment is still noisy, of course, given the violent work involved.

In the end, choosing a breaker attachment for a skid steer loader can be as simple as going with a favorite brand. Chicago Pneumatic breakers are hybrid hydraulic-nitrogen gas devices that Petherbridge says “will outperform a purely hydraulic breaker all day.” Allied hammers, according to Scholz, are a quarter to a third more productive than other hammer brands with a typical customer describing the Allied brand as a “high-production hammer that works great.”  Bieller says Atlas Copco breakers are easy to use, have a long service life — and assistance is “only a phone call away.”