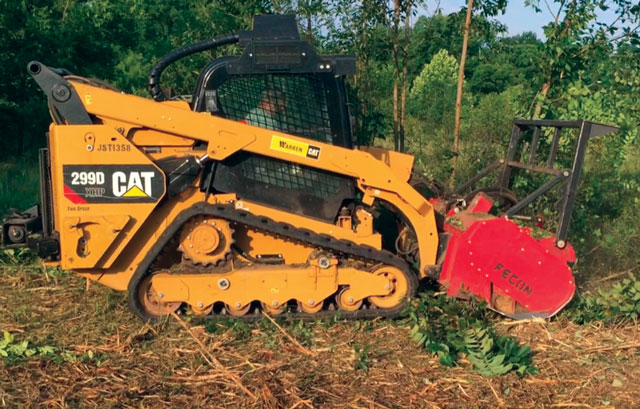 Legend has it that in 490 B.C., a Greek soldier named Pheidippides ran 25 miles from Marathon to Athens, announcing the defeat of the Persians and inspiring the standard course length for the modern-day marathon. Even though he ran some 2,300 years before the first cement road, Pheidippides probably ran all 25 miles on a well-trod path clear of brush and overgrowth. Lucky him. When Jerry Arthur was contracted to clear a marathon-length water line right of way, he was faced with 20 years of built-up brush and trees. With the clock ticking, Arthur turned to Cat equipment and Fecon Bull Hog mulching attachments to get him across the finish line.

It would take a Boston Marathon winner a little over two hours to run the 28 miles that Bushwackers was contracted to clear by the North Texas Municipal Water District. Faced with 20 years of vegetation, however, the clearing took five months — a feat worth a medal by any right-of-way clearing standards. Soft woods, hard woods, thorny brush — there’s no such thing as typical vegetation when it’s been growing untouched for two decades. And on an 80-ft-wide right-of-way project that spans 28 miles, there’s no such thing as a typical land plot: Some is bound to be farmland or private land, and in Texas, you’re bound to cross more than one creek bed.

Arthur and his team used a Fecon CEM36 Bull Hog mulcher head attached to a Cat 308 excavator quite a bit. The articulated arm of the excavator can reach just about anywhere, and the mulcher can mulch just about anything. Even on tricky creek beds, the team could park the excavator and reach wherever needed to be mowed. On more accessible stretches, Arthur operated a Cat 299D XHP with the Bull Hog attachment (pictured above).

The mulcher happily chewed through thick brush and young trees up to 15 in. in diameter, leaving behind a pile of finely chopped mulch in its wake. What really took up time were the gates. Private land was fenced off from the water line right of way, and rather than clearing around it the team had to take the fence apart, clear the brush and rebuild the fence with a gate and X-braces. Arthur figured his team could handle five gates a day. On a similar project he cleared with the North Texas Water Municipality, his team faced 70 gates. 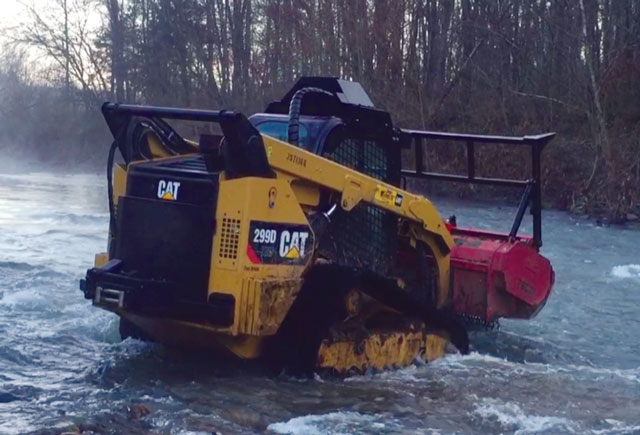 In order to maximize efficiency and longevity, Arthur operated his mulcher with a mixture of knives and carbide blades in the rotor head: 2/3 knives on the outside and 1/3 carbide on the inside of the head. The knives are built for cutting but have a shorter lifespan. They also have to be sharpened after every 10 hours of use. The carbide blades grind, producing a thicker mulch but last much longer. The longevity and low-maintenance of the equipment is important to Arthur and his team at Bushwackers, but what keeps him coming back is the face of the organization.

Jim Wahl is the president of Wahl Marketing Communications.