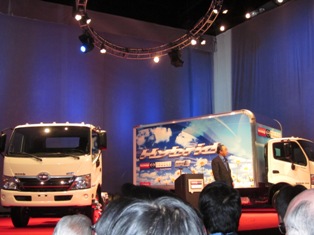 “The new cab over lineup is an exciting addition to the Hino Trucks brand as we strive to provide our customers with a comprehensive offering for their trucking needs,” said Sumio Fukaya, president and CEO of Hino Trucks. “With the introduction of this new truck, Hino Trucks is making the diesel-electric hybrid a viable option in the U.S. commercial truck industry for the first time.”

The Hino 155h and 195h Diesel-Electric Hybrid cab over trucks represent a giant leap for alternative fuel commercial vehicles in North America — in fact they were designed from the ground-up for the North American market. Hino developed the world’s first hybrid bus in 1991, and has been continuously evolving its hybrid technology ever since. Today, with over 10,000 hybrids in the market, Hino is proud to have manufactured the highest number of hybrid trucks around the world. The new truck is in fact Hino’s sixth generation of hybrid technology.

“Hino’s introduction of a hybrid model marks a significant milestone in the industry’s growth. Given Hino’s long track record with hybrid, fuel saving technology, this will provide an additional choice and help grow the market for efficient vehicles, exactly at the time fleets need more options,” said CALSTART CEO and president John Boesel. CALSTART represents more than 120 companies and fleets working toward a clean transportation tech future. Hino is a member of CALSTART and its Hybrid Truck Users

The diesel models will be available starting in August of 2011 at Hino Trucks dealerships across the United States. Due to initial product availability, the hybrid models will follow a “roll out” approach and will be available in the following markets in December of 2011: New York, Philadelphia, Washington D.C., Chicago, Atlanta, Dallas, Houston and California.

Enjoy this video of the big reveal, taken by the fine folks at the Work Truck Show.