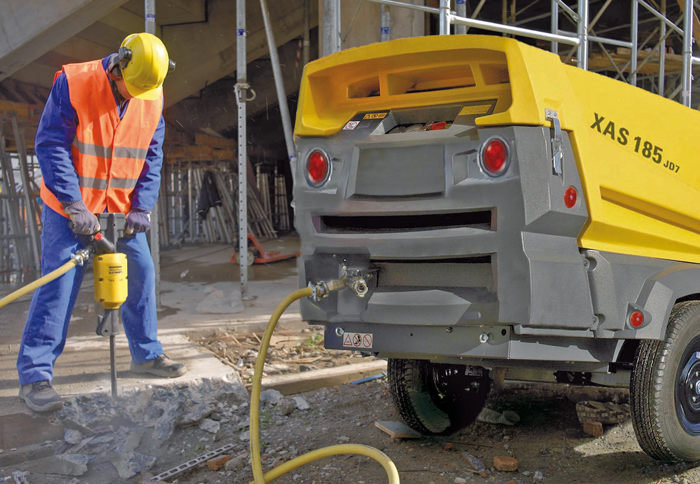 Contractors need an arsenal of equipment to get their work done. And although the idea of these fleets include big machines such as excavators and backhoes, the supporting cast of equipment warrants attention too. Portable air compressors allow contractors to channel pressurized gases to drive their tools and crews into ever new applications (hammers, vacuums, nail guns, pumps and other new jobs). Selecting the correct compressor is critical to the success of an operation. Air flow rate is measured in cubic feet per minute (cfm) and the discharge pressure in pounds per square inch (psi). These are the two most important factors to consider.

Ranging from 90 cfm to around 1,800 cfm, the smallest compressors are used for processes such as shot blasting, paint spraying and general tooling, and the largest compressors are mainly used in industrial applications such as oil refineries, food processing plants and in pipeline testing for pipelines that go across state lines. Utility contractors mainly use medium-sized compressors for a variety of purposes, including: to pressurize pipes after installation; to check for leaks; to clean water lines; for jack hammering and pavement breakers; for installing wires in a pipe; and for pushing plugs that pull the wires through tubes.

Mark Taylor, vice president and business line manager of Portable Energy for Atlas Copco Construction Mining Technique, one of the largest compressor manufacturers, says that customers and users can make a rough selection based off of flow and pressure, but how the compressed air will be used is also important. “The customer may also be using the air for a special purpose, where it needs to be dry and clean,” he says. “In this case, the compressor will require an after-cooler fitted and also some additional filtration to remove moisture and dirt particles from the air. We call this our portable full feature.”

Some additional factors to consider in order to make a selection include:

1. How many tools will you run and will they all run at the same time?

2. How far away will the compressor be from where the air is used? There will be a pressure drop in the pipe used to transport the compressed air, so the customer may not get what he was expecting at his point of use.

3. Is the compressor going to be used at altitude? This is important since at higher altitudes, air becomes thinner, affecting how the compressor’s engine runs and how much air pressure is produced.

David Matiko, district manager at Doosan Infracore Portable Power, another major compressor manufacturer, says 185 cfm is the most common size that utility contractors own. This size of compressor can run two jackhammers and is designed for pavement breaking. He also says many contractors are starting to use 300 to 450 cfm compressors because they need higher flow and pressure. Matiko mentions another important factor to consider when purchasing is the compressor’s size and weight. The smaller- and medium-sized portable compressors are mounted on wheels, wagon-style, and can be easily moved around, towed or mounted on service trucks. Some of the larger compressors can weigh 20,000 lbs, requiring a large truck to move them around.

“More utility contractors want to mount compressors on their truck to increase maneuverability and donít want to worry about hauling or towing a compressor,” Matiko adds.

Although wagon mounts are more maneuverable at low speeds and can get very close to the corner of a building, crews cannot tow them above 20 to 25 mph. Different utility mounts are also offered for the back of a flatbed that make it easier to access and use.

“The controls are curb side and fluid changes are also on one side,” says Matiko. “Towable compressors may have controls on both sides, but the utility-mount compressors have everything on one side. It’s helpful and in demand.”

Bryce Puckett, Texas Division rental manager at Kirby-Smith Machinery Inc., points out that utility contractors are using air compressors for new uses. For example, some companies are relining piping with an epoxy that requires steam to cure.

According to Matiko, Doosan offers a new line of machines with a dual pressure feature. With a flip of a switch, the compressor provides higher pressure (and low air delivery) or higher flow (and low pressure). “Depending on your use, sandblasting or testing a pipe, if you need more pressure this feature allows the same machine to be used for both,” he says.

Another feature to consider is the compressor’s body materials. Matiko mentions that over the last few years, more compressors have been designed with a composite upper structure, which provides greater impact resistance, lighter weight and a lower center of gravity when compared to steel-bodied units. However, if these materials are punctured, they require replacement whereas the steel ones could be repaired.

Look at the Long Term

There are many factors to take into account when purchasing a compressor that could be with you for 10 to 15 years. “Regardless of how much you invest in the new machine, you need to feel confident in the manufacturer,” says Taylor. “Look at all of the costs over its life, not just in the initial price. How much does it cost to run, to service, and if the compressor does fail, how quickly can you get parts and labor to fix it? Also consider it’s reliability and resale value.”

Debbie Sniderman is an engineer, consultant, writer and CEO of VI Ventures LLC. She can be reached at www.vivllc.com.

In addition to the benefits of fuel and operational efficiency, these units include additional features offering increased productivity, reliability and durability, including: a recently reengineered cooling fan that significantly reduces operation noise, cutting noise levels by up to 5 dBA compared to past models; fuel tank capacities of 60ñ75 gal, which translates to nine to 11 hours of runtime at 100 percent load; an optional aftercooler and IQ filtration system providing cleaner, drier air and system protection; a bolted-on A-frame drawbar creating improved towing stability; and a lot more.