A technology already in use on all cars and light trucks sold in the United States is revolutionizing the way that compact loaders and attachments communicate with each other. CANbus technology (CAN stands for controller-area network) was first developed by automotive engineers over 20 years ago. It allows microcontrollers and devices to communicate with each other within a vehicle without the need for a host computer. CANbus technology opened up the possibility of using one wire to transmit and receive multiple messages. 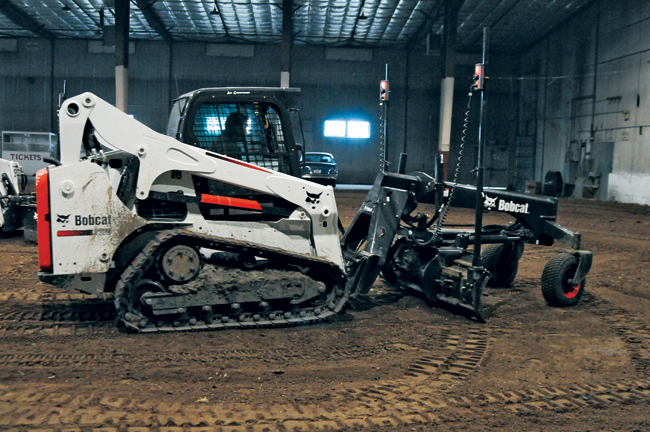 “The 14-pin attachment control kit is a traditional 12-volt power and ground system,” says Justin Odegaard, attachment product specialist with Bobcat Co. “As a result, for each attachment function, you need at least two power-positive type wires and, typically, a common ground. The 14-pin system and a less common 8-pin variant are used on most other makes of compact equipment.”

“It’s a very simple system,” Odegaard says. “You’ve got wires that directly tie things together. Unfortunately, that’s all you’ve got. There’s no way to bring more information in or get more information out.”

Over the years, attachments grew more complex with numerous additional functions. In addition, there was a need to give machines and attachments the ability to talk to each other. This led Bobcat Co. to adopt CANbus technology and the 7-pin attachment control kit on most of its machines.

“With CANbus and the 7-pin system, we can send dozens of messages down the same wire harness and the attachment can understand what they are,” Odegaard says.

For example, he says, on the largest Bobcat tree-spade attachment there are four blades that go up and down, two gates that open and close and a pair of rear stabilizers. With the 7-pin system, all of that can be controlled with four switches, because one switch can be used to move a blade up and down and another to toggle between the four blades. “That can’t be done with a 14-pin system,” Odegaard says.

But that’s not all. Because the attachment and the loader can communicate, the loader knows which attachment is connected to it, Odegaard says.

Also, similar to the way the “check engine” light works on your car or light truck, the attachment can generate an error code to alert the operator that it has a problem.

RAC attachments use a box on the attachment that allows the operator to safely start and stop the machine and operate certain attachment functions from outside the cab of the machine. The RAC control box communicates with the machine to make sure certain parameters are met before the attachment will start the engine and allow operation.

“Before we introduced the 7-pin system, the 14-pin system wasn’t enough,” Odegaard says. “We actually had to use a 19-pin harness to be able to run the RAC attachments.”

In addition, with a 7-pin attachment connected to an M-Series Bobcat loader with the optional deluxe instrumentation panel, the operator can go to the attachments section and view additional information about the currently connected attachment. This may include attachment hour meters and resettable job clocks that keep track of exactly how much time the attachment was used on the jobsite. Or, when operating a laser-guided box blade or grader attachment, the operator can see where the blade is relative to the target and can move the desired grade up or down from the comfort of the cab.

For further information, see your Bobcat dealer or go to www.bobcat.com/attachments/all_attachments.

Doug Zoerb is a public relations professional with Two Rivers Marketing, based in Des Moines, Iowa.