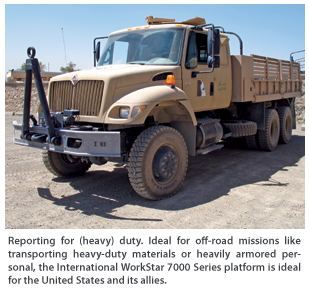 Besides making tough trucks for the U.S. commercial and construction markets, Navistar is one of the world’s prime suppliers of military transports and mine resistant ambush protected trucks (MRAP) armored vehicles. The company’s International MaxxPro MRAP vehicle for instance incorporates the latest design in armoring technology, built to withstand ballistic arms fire, mine blasts, improvised explosive devices, nuclear, biological and chemical environments and almost anything that threatens the safety of its crew.

Navistar Defense announced in early January that it had made a new foreign military sale to the Israel Ministry of Defense. Under the $12 million contract, Navistar will deliver 114 medium tactical vehicles by June 2010. In addition to the Israeli contract, the company also received a second four-year, System Technical Support (STS) contract for up to $78 million to support its International MaxxPro MRAP vehicles.

“Medium tactical vehicles provide a solid base for our U.S. business and our ability to customize these vehicles allows Navistar to also support the mission needs of allied armed forces,” said Archie Massicotte, president of Navistar Defense. “We are honored to help serve U.S. allies and we will continue to focus on growing our foreign military sales in 2010.”

Based on Navistar’s commercial International WorkStar or 7000 Series platform, vehicle variants for Israel will include cargo, recovery and tow trucks. Parts and service are not included in the contract. Though the company will target growth in markets outside the United States as part of its 2010 strategy, the company remains dedicated to its U.S. customers. Under Navistar’s four-year STS contract, the company will provide hardware to accompany work conducted under the previous MRAP STS engineering award announced Nov. 9, which is also a four-year contract for up to $78 million. Navistar’s STS awards allow the company to improve MaxxPro MRAP vehicle reliability, support combat issues encountered in theater, as well as provide new vehicle enhancements.

“As one of the leading providers of MRAP vehicles, we have a duty to evolve our vehicles to help counter changing in-theater threats,” said Massicotte. “Both our STS contracts will enable us to quickly serve those who require new vehicle features to tackle the road — or lack of road — in Afghanistan.”