Michelin North America will again expand its operations in South Carolina. It was announced today by Michelin North America’s chairman and president Pete Selleck.Michelin, the largest manufacturing employer in the state, is breaking ground next week on a new Earthmover tire manufacturing plant in Anderson County, S.C. The company is also expanding its existing Earthmover tire facility in Lexington, S.C.

The two projects represent a $750 million investment and will create up to 500 new jobs. This announcement is in addition to Michelin’s 2011 commitment to add an estimated 270 jobs and invest $200 million in its existing Lexington passenger and light truck tire manufacturing facility. This expanded operation at Lexington will begin production in October.

“Michelin intends to maintain and strengthen its leadership in all its specialty businesses, especially Earthmover radial tires,” said Jean-Dominique Senard, managing general partner of Michelin. “The market for Earthmover tires grew by more than 20 percent between 2009 and 2011. This new facility will help us meet sustained demand while also attaining our growth objectives for 2015.” 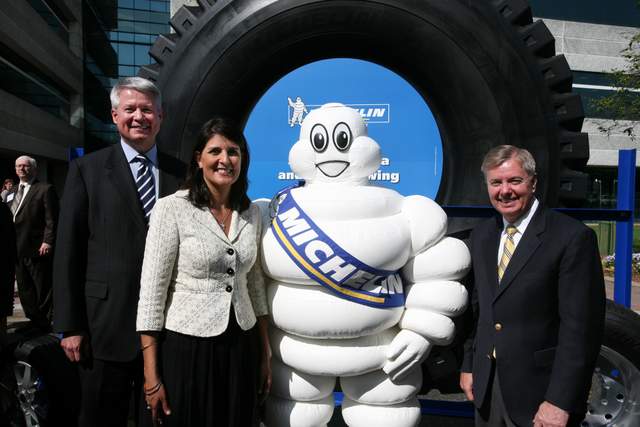 Selleck said: “There is unprecedented demand for Michelin Earthmover tires throughout the world. It’s a tribute to the productivity of our employees and the pro-business environment in South Carolina that the company is expanding its Earthmover capacity in the state where we first began manufacturing in the United States.”

“Nearly every Earthmover tire is sold before it is produced,” said Selleck. “Michelin is one of very few companies in the world that is able to produce these high technology tires.”

“Michelin has been part of the economic and social fabric of South Carolina for decades and remains one of our finest corporate citizens,” said South Carolina Gov. Nikki Haley. “It really is a great day in South Carolina when our largest manufacturer reaffirms its commitment to the state.”

U.S. Sen. Lindsey Graham said, “For nearly 40 years, Michelin has played an essential and leading role in South Carolina’s economy. Today’s announcement is more good news for South Carolina as it reinforces Michelin’s commitment to manufacturing and good-paying jobs in our state. We are very proud that since 1973 Michelin North America has called South Carolina home.”