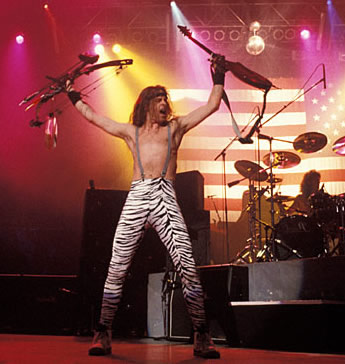 For thousands of outdoorsmen, December is prime hunting season. But for you and a friend, this December 10-14, 2011, could be hunting season with sporting legend Ted Nugent. Leica Geosystems, a premier manufacturer and distributor of machine control technology, has announced the official dates for its “Go Hunting with Ted Nugent” Sweepstakes — a promotion specially designed for CONEXPO-CON/AGG 2011 attendees.

The three-day hunting trip for you and a buddy at the famed Y.O. Ranch in Mountain Home, Texas, with Ted Nugent as your hunting host, will take place from December 10-14, 2011. One (1) Grand Prize will be awarded to a single winner. The prize will consist of a hunting package for two people at Ted Nugent’s private birthday celebration at the Y.O.Ranch in Mountain Home, Texas.

The hunting package includes three days of hunting, meals, accommodations and a guide. Animals in the package are either a management white tail or management sika buck. You have your choice of either bow or gun hunting with this package. In addition to hunting at the nation’s premier game preserve, hunters will get to share meals and spend personal time with Ted Nugent during this private birthday celebration. With 40,000 acres of rugged hill country terrain, the Y.O. Ranch has been described as “a trophy hunter’s paradise.” It is home to trophy native game as well as 60 species of exotic game from around the world.

The hunting trip will take place in conjunction with Ted Nugent’s private birthday celebration. Mr. Nugent, an avid hunter and lifelong outdoorsman, has been inducted into the National Bowhunters Hall of Fame and named Favorite Hunting Personality by the readers of Outdoors Magazine. Entering the “Go Hunting with Ted Nugent” Sweepstakes is easy and simple: To enter your name once for a chance to win – Visit the Leica Geosystems booth #557 and watch a product demonstration — Booth #557 is located in front of the convention center’s main entrance.

Go to www.conexpo2011.com, clink on the “Exclusive Show Promotions” tab and find out how to TRIPLE YOUR CHANCES TO WIN this exclusive hunting trip with Ted Nugent.