Evolution of the Backhoe Loader

Many construction contractors have finally begun to find the off-ramp from the rough economic road they have been on for at least the past five years. As always, when the economy sags equipment owners hold on to their machines longer. Lack of projects discouraged further equipment investment, and fewer hours on the job meant a contractor stretched out the 4,000 hours he typically uses a machine over maybe six years rather than four. Positive economic signs ahead point to busier crews and the need for contractors to evaluate the equipment in their fleet to take advantage of every opportunity. In so doing, many will find that backhoe loaders are the same versatile machine they’ve always been — only now they’re even better thanks to a number of innovations. 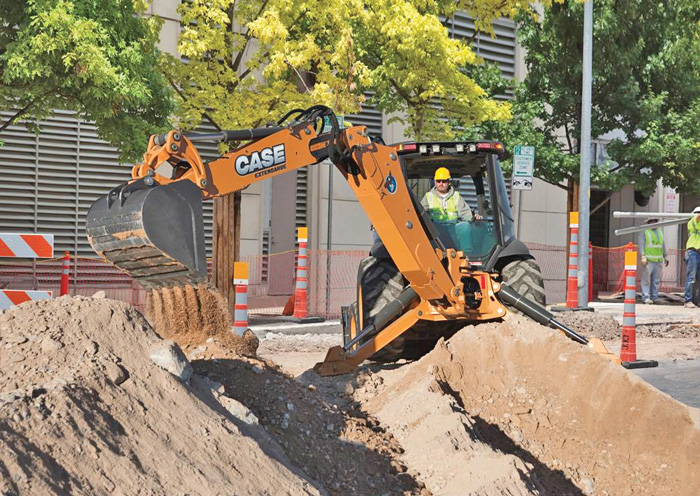 While contractors worked through the economic conditions of recent years, construction equipment manufacturers have also worked to help customers succeed in any way possible — even though the level of investments declined. At the same time, OEMs faced having to make changes in their machines to comply with each next level EPA diesel engine emissions standards.

Backhoes loaders — the equipment typically used on most construction projects in the 14- to 16-ft dig depth group rating with engines ranging from 70 to 108 hp — are among the machines affected by the environmental shift. This is especially true since Tier 4 Interim (Tier 4i) regulations translate into a 90 percent cut in the amount of allowable particulate matter emissions compared to the Tier 3 level, along with a further reduction of nitrogen oxides (NOx) emissions by 50 percent. Yet rather than simply comply with the new emissions standards, innovative construction equipment manufacturers used the Tier 4i requirements to take a fresh look at how they can update their machines to respond to this market segment’s unique needs and the upward trend in business.

The added emission controls needed to achieve Tier 4i could have meant even larger engines to deliver the power and torque contractors experienced from their Tier 3 backhoes. However, some manufacturers attacked the challenge by enlisting electronic controls and in the process came out with Tier 4i-certified machines that not only delivered the muscle with smaller engines but also provided the agility needed for the same tasks, including digging and lifting. The overall result has been more fuel-efficient machines and more responsive operation with quicker and easier adjustments on the go, as well as the ability to obtain more operational data in the cab and remote diagnostic possibilities for up-to-the-minute maintenance.

The new backhoes clearly go beyond decreasing emissions, especially since most manufacturers set their sights on giving contractors greater fuel efficiencies with reductions in the neighborhood of 4 percent, in addition to better lifting capacities with a focus on durability and serviceability. When trenching and laying pipe are required in tight places, these smaller engines result in a sleeker chassis for better maneuverability, greater versatility and superior cab visibility. The immediate payback from increased visibility means the ability to spot roots or cracks in the pipe when doing repairs. And since many backhoe owners are also operators, they’ve come to appreciate the boost in productivity that results, whether they’re operating the unit themselves or someone else on the crew is at the controls.

Another innovation includes advancements in hydraulics. In short, backhoes can get more out of their engines without demanding more RPMs and higher fuel usage. Replacing some of the gear pumps with smoother operating variable drive pumps have also allowed for higher pressures, enabling increased breakout forces at the rear of the machine while at the same time allowing more precise movement. For example, Case backhoe loaders offer the company’s Power Lift feature which improves the complete performance at the rear of the machine even above their standard performance.

Bringing in the New

So unlike some economic recoveries, part of that light at the end of the tunnel are these advancements in backhoe design — enabling contractors to more profitably take advantage of this increase in business activity. As more projects come through the door, the increased revenue lets contractors naturally turn their attention to replacing their aged construction equipment with these new and improved versions. After all, repair expenses from aged and stressed equipment are probably happening more frequently — and no one wants profits to suffer from machine breakdowns as they welcome new business.

For many contractors, the strategy is not to buy right away, but to test the waters by renting the equipment they need. This trend in rental activity has been robust throughout the industry recently. Given the severity of the last recession, it’s no wonder many will want to ensure the recovery is for real before they invest.

But when they do, the new backhoes are going to present fresh perspectives on what kind of equipment can go out to the jobsite. The key is picking a machine based on performance rather than size. Thanks to the efficiency and power of the new backhoes, it is possible to ensure the machine is not oversized to avoid higher acquisition costs and higher operating costs (including fuel) for an overall lower cost of ownership.

These decisions will, of course, depend on the view ahead of the jobs coming up. What do you need in terms of dig depth and lift performance? The evaluation also depends on how well you have tracked and analyzed the jobs you have done in the past. Too often we have seen contractors going out and automatically quoting a similar sized piece of equipment they used before. Being able to acquire a smaller, but just as powerful machine, certainly results in the ability to more easily move the business ahead financially.

In addition, because the versatile backhoe is a Swiss Army Knife of construction equipment, a properly sized machine — depending upon the projected workload — can avoid the need to invest in multiple machines. Contractors have typically used backhoes for digging and grading. But with access to more attachments over the past few years, backhoes are being used with breakers, augers, 4-in-1 buckets and more.

Depending upon the kind of anticipated projects, the new backhoes could replace not just older backhoes, but other kinds of equipment in your yard that might have outlived their time. A backhoe can lift, place and dig like a compact excavator. Actually, the lifting performance of some backhoes now matches that of a midi excavator weighing in at 7.5- or 8-ton size class, and are easier to transport that an excavator. Compared to a skid steer, a backhoe is often also easier to drive around the jobsite. The ideal is to handle the most number of jobs with the fewest pieces of machinery.

From a human resource standpoint, there’s another plus with backhoe innovation: If someone has operated a wheel loader or an excavator, he can climb into the cab of a backhoe and get down to work and feel comfortable doing it because of compatible controls. When hiring on additional crew, you can also take a look at the people who have operated other machinery and know they can switch from one machine to another. The fully integrated loader control levers allow full functionality of the loader bucket and auxiliary hydraulic attachments, and the standard pattern control switch for backhoe pilot controls allows operators to choose the controls in which they are more comfortable. Finally, for traditional backhoe operators that still prefer mechanical style controls in either foot swing or two lever; both are still available through some manufacturers.