In contrast, nonresidential specialty trade contractors gained 8,000 jobs in July. Still, the sector’s job force is smaller by 183,500, or 8.5 percent, from a year ago. The heavy and civil engineering sector saw a loss of 700 jobs last month after gaining 1,300 jobs in June.

Total employment — which includes both private and public — fell 131,000 for the month of July, with the largest share falling in the government sector which lost 202,000 jobs. The severe loss in government sector jobs is a reflection of the termination of 143,000 temporary workers hired for the 2010 Census. Total private employment gained 71,000 jobs in July. Since the beginning of the recession, however, total private employment has lost 7,837,000 jobs or 6.8 percent. The national unemployment rate remained unchanged at 9.5 percent in July.

Analysis
“Today’s employment data was disappointing,” said Associated Building and Contractors chief economist Anirban Basu. “The expectation among economists was that today’s numbers would have revealed that the nation shed just 65,000 jobs last month. However, the implication is that the economy is recovering more slowly than expected.

“The data also indicate that construction job losses have slowed dramatically, particularly in those segments powered by the stimulus package passed in February 2009,” said Basu. “Still, this news provides stakeholders little comfort since the eventual exhaustion of stimulus support will become increasingly apparent in construction employment data next year.

“There are at least two major implications associated with this. First, at some point jobs associated with privately-financed activities must begin to expand. Second, state and local government support for capital spending and projects must also begin to reemerge if the nonresidential construction sector of the U.S. economy is to avoid another downturn within the next 18 months,” Basu concluded. 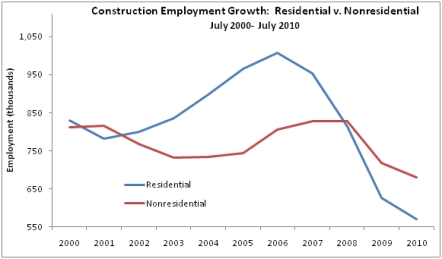