Briggs & Stratton Challenges You to Race at VanguardPowerChase.com

Busy contractors and dealers don’t always have time to watch their favorite NASCAR competitors capture checkered flags, but that doesn’t mean they still can’t enjoy a little racing fun. Briggs & Stratton has just introduced a high-octane way to bring industry people together online for a little friendly NASCAR competition and a chance to win some big prizes.

The Vanguard Power Chase is a “pick‘em” style contest where competitors choose drivers throughout the final 10 races of the stock car season, which begins September 19, 2010. Points are awarded based on where drivers finish. There’s more at stake than just bragging rights, though. The prize list is topped by a four-day trip for two to stock car racing’s premier 2011 event.

“We were looking for a fun way to say thank you to the dealers and customers who have contributed to the growing success of Vanguard engines,” said Dan Roche, marketing manager for Briggs & Stratton Commercial Power. “Vanguard engines are about power and durability, and nothing exemplifies that better than stock car racing.”

Everything needed to sign up and compete can be found at www.VanguardPowerChase.com. Participants can sign up any time between now and September 19, to maximize the odds of winning. Vanguard Power Chase Prizes:

Disclaimer: This program is not affiliated, endorsed or otherwise recognized by or in association with any drivers, teams, NASCAR or any other automotive/sports entity. 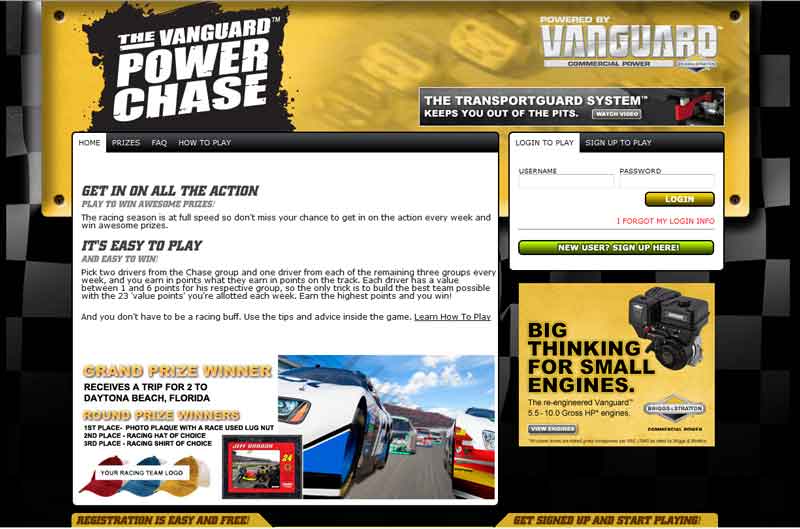