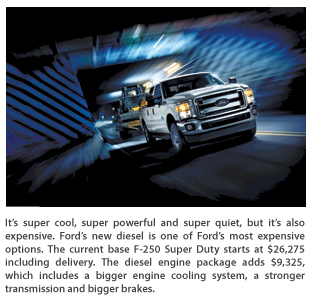 Big progress is being made on the Ford diesel front. The American motor company and truck maker is focusing its manufacturing acumen on building its own diesel engines for its famous Super Duty truck lines — engineered with unique power plant technologies and a revamped line of consumer and commercial trucks focused on power and efficiency.

Perhaps you recall CE’s annual Work Truck Journal issue in February in which we detailed the legal dispute between Ford Motor Co. and Navistar International Corp. over its longstanding diesel-engine supply contract, contending that Ford was making its own diesel engines for future production, intending to produce the engine itself for use in the F-150 and possibly other vehicles. Well that’s water under the bridge (no worries, it’s now settled) and Ford has not started making those diesel power plants, debuting a doozy in October — its new 6.7-liter Power Stroke diesel engine, which will be utilized in the 2011 Super Duty lineup. It’s expected to be one of the quietest, smoothest diesels on the market, said Ford officials, outperforming its closest competitors by several decibels.

“Historically, consumer perception has been that diesels should sound rough and tough, but from a sound quality perspective they were actually loud and unrefined,” said Scott DeRaad, engine NVH (noise, vibration and harshness) engineer. “At Ford, we approached the new diesel development as though it was more than a work truck and something that people wanted to drive, making ‘quieter’ a reason to buy.”

The new diesel will also deliver other significant improvements for Ford, including better torque and horsepower, class-leading fuel economy and best-in-class towing and payload, said Ford officials. To meet 2010 federal emissions requirements, the engine is backed by an SCR system — Selective Catalytic Reduction of NOx using an ammonia compound as the reductant. The system uses an after-treatment of Diesel Exhaust Fluid (DEF) to reduce NOx emissions. The DEF tank can be refilled by the owner and will need it about as often as regular service intervals. The chemical will be available at Ford dealerships, truck stops and auto parts stores. The urea tank must be refilled every 7,500 miles. Ford hasn’t yet released power numbers, but they are said to be significantly higher than the 350 hp and 650 lb-ft of torque of the outgoing model. Fuel Efficiency is said to be better as well. The 6.7 is capable of running on B20. 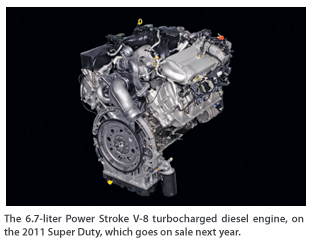 Right now the company is concentrating on promoting the diesel’s sound quality. Most of the improvement in NVH comes from changes made to the combustion system and the structural integrity of the compacted graphite iron block, as well as from mounting one turbocharger on the engine block instead of two. Specific design upgrades were made to both the piston and the piston bowl to optimize the combustion process, which features a two-stage combustion event instead of a single-injection event, causing harsh, sudden and loud combustion. Instead, a starter or pilot injection of fuel begins the compression process before the main injection. The result is a smoother combustion and a more refined sound for the customer.

When at idle, two pilot injection events are used to make the firing process even smoother and aid in quietness. The “ticking” of the high-speed injectors also is masked by specially designed covers on the engine. Mounting the turbocharger from the center housing directly to the block provided several advantages as well in terms of NVH performance.