2009 may be the best year yet for estate planning, even though it is shaping up to be one of the worst in decades for the construction industry. When values are depressed, estate transfers can accomplish more. If you are an owner of a company intending to continue as a family business, part of that estate plan should include gifting company stock to family members. Although Christmas is long over, you can still gift more of your business when it’s worth less. Existing gift and estate tax law for 2009 makes it even more attractive.

At this point, most of the civilized world is acutely aware that we are in the midst of a widespread economic downturn. In 2008, the Dow Jones Industrial Average and S&P 500 fell by 34 and 38 percent, respectively. Many engineering and construction firms suffered even greater losses. The valuation multiples at which public E&C firms are trading have fallen as well and in most instances, are at (or near) historical lows. In fact, as of Dec. 31, 2008, the median price to earnings ratio of the publicly owned engineering and construction firms tracked by FMI was 9.2. Over the past 10 years, these same firms have traded at a median price to earnings ratio of 16.7. In other words, engineering and construction firms are currently trading at roughly 55 percent of their historical norms. 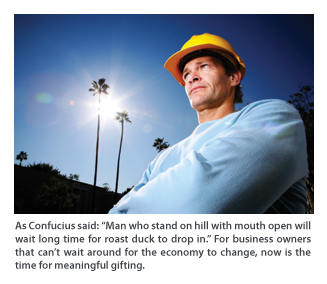 While this information is not terribly uplifting, an opportunistic owner who is interested in resolving ownership transfer and estate taxation issues, can take advantage of this depressed environment by engaging in estate planning and by gifting assets, including company stock, to his or her heirs. A bleak public stock market, coupled with depressed financial results, can give shareholders the opportunity to utilize annual and lifetime gift tax exemptions to pass on a greater percentage of their company to heirs than would have been possible a short time ago in a “normal” market.

The Economic Growth and Tax Relief Reconciliation Act of 2001 greatly changed the system for applying gift and estate taxes. The law gradually lowered tax rates while increasing exemption amounts. In 2009, an estate valued at $3.5 million or less is exempt from estate taxes. Above that level, the estate is subject to estate tax at rates as high as 45 percent. In 2010, estate taxes will be repealed altogether, albeit for only one year, with 2011 returning to rates (60 percent maximum) and exemption levels ($1 million) not seen since 2003. The future structure of the estate tax is uncertain; however, most experts agree that it is unlikely Congress will raise the exemption levels above those in 2009 or that there will be a rate cut.

Considering our nation’s rapidly mounting deficit, it seems even less probable Congress will be in a giving mood when it comes to large estates. The good news for avoiding some amounts of gift and estate taxes under the 2001 act is that individuals will continue to be able to gift up to $13,000 each year to an unlimited number of recipients, in addition to a lifetime gift tax exemption of $1 million, without incurring gift tax. This provision will remain, even when other provisions expire in 2011.

For example, every year a husband and wife could gift $26,000 (i.e., $13,000 each) to any desired individual, completely free of tax. Furthermore, at any given time, the spouses could employ their lifetime gift tax exemption and give $2 million combined, which is in addition to the amount of their annual exemption. If you make gifts to heirs on an annual basis, now may be the time to gift more shares and a larger ownership interest in the company in order to take advantage of the bad news/good news of today’s market. The following examples show how this can be done. 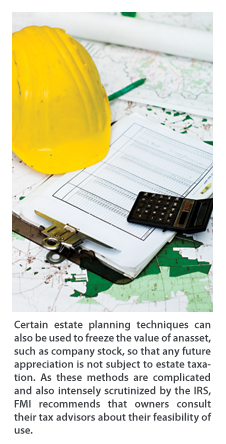 Under the aforementioned assumptions, the total stockholders’ equity in the hypothetical company would be worth $25 million in a “normal” market (i.e., the company has the ability to generate $5 million of sustainable pretax earnings, and under “normal” conditions, the market would value the company at five times this amount, or $25 million). To determine the ownership that could be transferred via a $156,000 gift, which represents a minority ownership stake in the company, the value of the company ($25 million) was discounted by 30 percent ($17.5 million). Thus, the $156,000 gift transferred 0.9 percent of ownership (0.9 percent = $156k/$17.5M).

If these shares had not been gifted, their pro rata controlling interest value, as still held by the husband and wife’s estate in 2009, would be worth $222,857 (0.9 percent x $25M) with the incremental estate tax of 45 percent on that value, or $100,286, assuming the total estate was worth more than the 2009 $3.5 million exemption value. Moving stock from value based on “controlling interest” to value based on a minority ownership stake will save tax dollars regardless of the economic vagaries of the marketplace. With depressed economic value, concurrent transference of stock from control to minority will amplify the potential tax savings.

Our hypothetical company in today’s market would be worth $15 million (i.e., the company has the ability to generate $5 million of sustainable pretax earnings, and under current conditions, the market would value the company at three times this amount, or $15 million). To determine the ownership that could be transferred via a $156,000 gift, the value of the company ($15 million) was discounted by 30 percent ($10.5 million). Thus, the $156,000 gift transferred 1.5 percent of ownership (1.5 percent = $156k/$10.5M). The controlling interest value of those shares would be worth $371,429 (1.5 percent x $25M), assuming the company’s value returned to normal. By gifting the shares today, you are able to transfer 0.6 percent more of the company. If the value of your company returns to its normal market levels, you will have saved your estate approximately $67,000 in 2009 and almost $90,000 in 2011 if estate taxes revert to their 60 percent maximum pre-2003 levels. 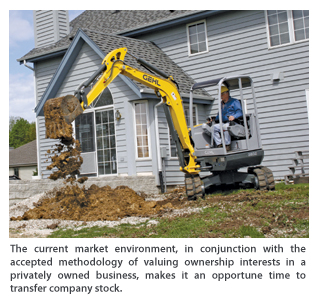 Each individual is given a lifetime unified credit for estate taxes and gift taxes. Any unused lifetime gift exemption can be used in the individual’s estate; however, the estate credit may not be used for gifting. In 2009, individuals can gift $1 million in aggregate over their lifetimes without incurring taxation.

For 2009, the estate exemption is $3.5 million with a one-year estate tax repeal in 2010 and a return to a $1.0 million exemption in 2011. Be aware, though, that the Generation Skipping Tax (GST) can impose taxes on any gift or transfer after death to your grandchildren’s generation or younger, as if it passed through each generation and was taxed accordingly. The premise behind the GST is to ensure that an estate tax is paid for each generation. This is primarily encountered when grandparents gift or bequeath assets to their grandchildren and bypass their own children. The GST is paid in addition to estate taxes and, at its current rate of 45 percent, is a steep tax. The good news is that the GST itself has a lifetime exemption of $4.0 million, which will allow you to gift up to this amount without incurring the extra tax.

By gifting shares now, an individual can take advantage of lower valuations and achieve certainty with the “gifting” side of the unified credit.