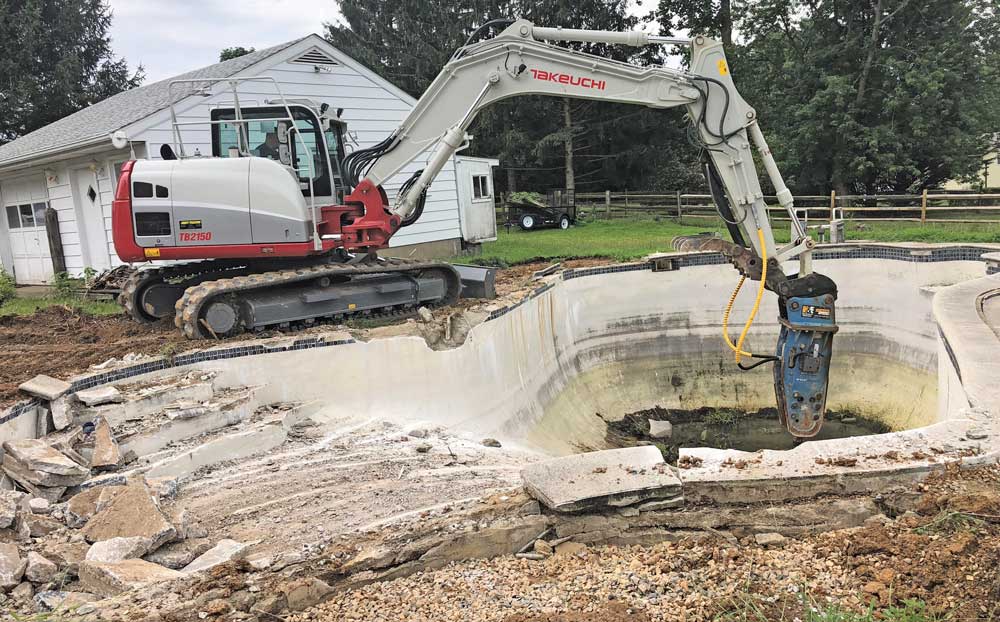 A house with a swimming pool always sounds great — well, almost always — until you start to realize the time and money needed for maintenance upkeep. Pools aren’t for everyone, but the good news is that Carroll Bros. Contracting has your back. They have been making pools disappear since 2004. Based in Annapolis, Md., the Carroll Bros. crew casts a wide net to serve customers in Washington, D.C., and Baltimore. While they also perform demolition and general excavation services, pool removal is their forte.

A typical week sees Carroll Bros. removing two pools on average. Each removal takes three to four days. The contractor works for real estate agents and customers who are buying a home, selling one, fixing one up or owning as an investment. Because many customers do not like the risks involved in owning a pool, pool removal can increase property value. Often, Carroll removes pools for couples whose children have grown up and moved out of the house, so the pool no longer gets any use.

Carroll says it’s typically an easy decision because demolishing a swimming pool is much more cost effective than rehabbing one.

“Originally, it was a little niche in the market. Nobody wanted to remove pools, but the need was there,” says Tom Carroll, owner and founder of Carroll Bros. “A lot of homeowners couldn’t find someone who could do it. Excavating contractors said the job was too small for them, and it was too big of a project for landscapers. We’re put in the middle with a combination of excavating, demo and grading. It is fun and enjoyable work. Every pool is different and comes with its own challenges, so the work we provide never gets monotonous.”

Learning Through Trial and Error

There are plenty of self-help books on how to best maintain a pool but not exactly on how to rip one out. After 14 years, Tom Carroll could write one.

“We knew excavating and demolition, but pool removal was really trial and error at the beginning,” says Carroll. “The first one we tore out took us over six days to do. Now, we usually are in and out of removal jobs in half the time.”

With a small team of three, Carroll was encouraged by their first project. But he knew if the business was going to not only survive but also thrive, they would need to find a more efficient route to tear out pools. 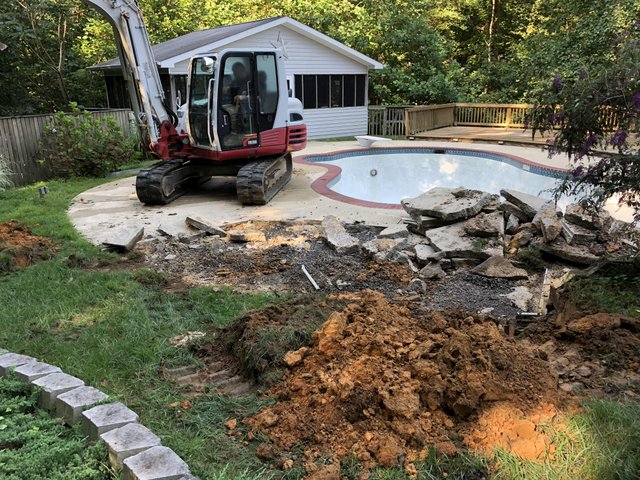 On-the-job experience and learning from past mistakes creates efficiencies along the way. Just as important is having the right equipment. Since the business was established, Carroll Bros. has gone with Takeuchi. Currently, they own five machines, all Takeuchi track loaders and excavators. They’re looking to add one more with the Takeuchi TW80 wheel loader.

“We originally tried a few different manufacturers out, but we really gravitated to the reliability and operator comfort of the Takeuchi machines,” says Carroll. “We demo some different brands from time to time, but we just keep going back to Takeuchi. They have great machines.”

Each of the machines is vital to the company, and they possess a wide range from small and compact to robust. They always try to use the largest machine possible to break up and demolish the pool because the larger the machine, the bigger the hydraulic breaker they can attach.

“We’re always working in backyards, and if we can squeeze a big machine in to get to the pool, we’re going to do it,” says Carroll. “It just depends on the space between houses and fences, things like that.”

This past spring, they purchased a TB2150 hydraulic excavator, the largest in the Takeuchi lineup. It was instrumental throughout a recent project in Baltimore. Despite tight quarters, the contractor used the TB2150 to demolish the pool.

“We needed the power, of course, but the TB2150 has an articulating boom that we were able to get into constricted areas with,” says Carroll. “With a big machine like this, we can have the pool demolished in one day now. Compact machines take longer because smaller hydraulic breakers just aren’t as effective. We cut our time in half with the TB2150 — the productivity is so much greater.”

Down to a Science

Every pool’s specs are different, but the process stays the same for Carroll Bros.:

“These pools are full of rebar and reinforcement, so we really have it down to a science,” says Carroll. “There are certain ways to do it. You don’t just go in and start breaking up concrete. Certain sections of a swimming pool are stronger than others — you pinpoint those areas and the pool will break up a whole lot faster.” 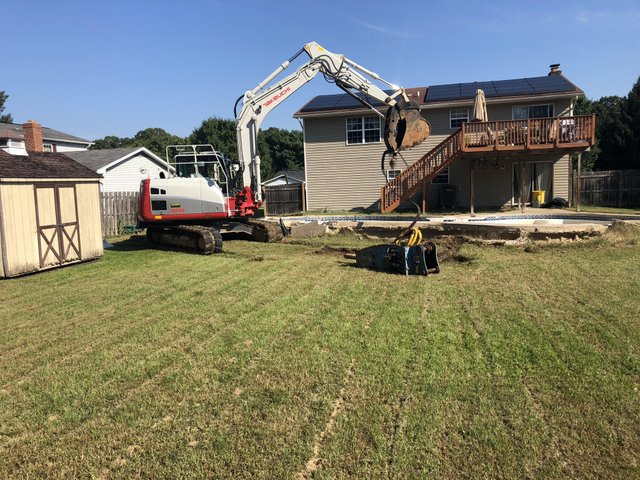 What started out as a small niche in the market became a big opportunity for Tom Carroll. He took a risk by venturing out on his own, but he jumped right in. The company is now making a splash and is recognized throughout the entire Washington, D.C., and Baltimore areas as trusted pool removal experts. Whether the pool is old, unused or simply a liability, Carroll Bros. will get the job done quickly, reclaiming outdoor space for customers for years to come.

Sean Neugent is a technical writer for Performance Marketing.

Authorized Doosan dealers are currently accepting customer orders for these new models, and machines are expected to arrive at dealerships in mid-July 2019.

Doosan Infracore is making a renewed push into the American compact arena. The company recently announced its North America division will be releasing three new mini excavator models in the 3.5-, 4- and 5-ton classes — the Doosan DX35-5, DX42-5 and DX50-5. These complement the existing DX63-3 and DX85R-3 models. It’s cool to note that these three models will be manufactured in the United States for fast delivery to U.S. and Canadian dealers. The units will each be available with an enclosed cab, including heat and air conditioning, or an open canopy configuration, and all three can be equipped with a quick-coupler, bucket and thumb attachment package. For more info, visit doosaninfracore.com.