The Most Popular Mini Excavator Attachments

Defined as an excavator under 6 metric tons, compact excavators are typically offered with a bucket that has a dig depth between 5 and 20 ft. Helming the two joystick controls, construction and utility contractors, landscapers and homeowners can make quick work of large digging tasks with these mighty minis. In addition to an excavator’s standard bucket, a plethora of equally awesome attachments are available to go beyond digging. Perhaps the most prevalent attachment is the standard bucket (discussed on page 28), but besides that, these three implements are some of the most popular choices for any excavator attachment arsenal.

An operator can turn a compact excavator from a digging machine to one capable of a variety of applications with the simple addition of a thumb (also known as a clamp). Thumb attachments can be used with trenching buckets or three-tine grapples. When equipped on a compact excavator, a thumb can perform a variety of tasks to make work on jobsites easier and more efficiently. Thumbs can be used in applications such as demolition to remove broken concrete chunks after the excavator has been used with a hydraulic breaker. Thumbs can be used in utility applications to move debris and materials around a jobsite, such as prior to trenching.

Landscaping applications can also take advantage of a clamp attachment. A thumb can be used to remove debris such as tree stumps during site preparation, or to move rocks and other decorative items for a landscaping project. A compact excavator’s design means that operators can reach areas with a thumb that other machines may not be able to access or have a difficult time accessing. Some things to consider when buying a thumb include hydraulic pressure, tool dimensions and the thumb cylinder. 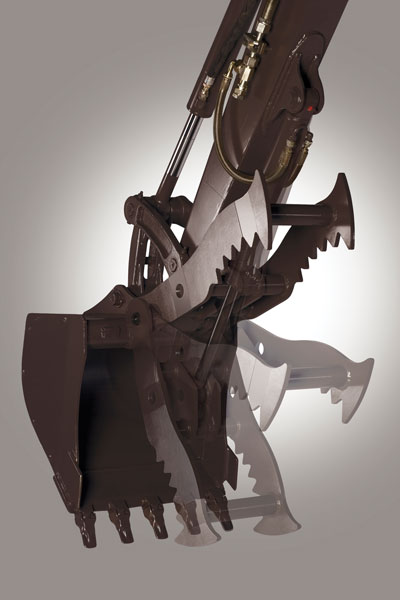 Does the thumb’s cylinder provide enough clamping power for your work load? Moving large logs and rocks will require a higher pressure rating than moving scrap materials. Compact excavator manufacturers will recommend that the auxiliary hydraulic relief valve pressure is adjusted down from the original setting so that damage is not caused to the thumb’s cylinder. We recommend 1,800 psi on all compact excavators. A thumb with more curvature can handle more material than a thumb that is less rounded. If you know that you will be handling large materials with your compact excavator, choose a more rounded thumb. It will make moving large materials a lot easier and save a great deal of time.

Many contractors rely on compact excavators for powerful and precise demolition work.

One of the most common attachments for compact excavators is the hydraulic breaker or hammer. This ubiquitous attachment can be found on any demo jobsite around the world, but that doesn’t mean you have to use whatever breaker you have on hand or whatever your rental yard has available. Most lines of breaker attachments are available to accommodate carriers anywhere from 3,000 up to 160,000 lbs (compact excavators typically weigh between 2,000 and 30,000 lbs), so the first thing you’ll need to know in order to choose the right breaker attachment is the weight class of the carrier.

Additional considerations for the carrier itself are tipping load, the length of the stick, overall lift capacities and its hydraulic flow characteristics, such as the operating pressure, hydraulic flow rate and auxiliary flow rate. Breakers are best classified by their Impact Energy Class, which is expressed in foot-pounds (ft-lbs). Matching the proportionally sized hammer to the carrier is a good measure of compatibility — an effective ratio is 15:1. For example, a compact excavator weighing 8,000 lbs most effectively operates a hammer weighing not more than 530 lbs.

Breaker manufacturers offer a choice of two operating system designs: Gas over oil (also known as a directing acting system) or fully hydraulic. With a gas-over-oil system nitrogen gas in the back head of the hammer is the primary source of impact energy, resulting in a very efficient transfer of energy to the piston and, subsequently, to the working tool. The fully-hydraulic system relies on hydraulic oil, in conjunction with the stroke length (length of travel) of the piston, to generate the impact energy. Breaker attachments generally range from $5,000 to $15,000, depending on selected options. Most breaker manufacturers equip their standard attachment package with a tool, hoses and a side-plate mount.

The precision digging abilities of a compact excavator can be easily enhanced with the use of a simple auger attachment. By switching out a bucket for an auger, an excavator goes from a trenching and digging machine to a machine capable of drilling targeted holes for fence posts, piers, poles or trees in a variety of conditions.
One big advantage an excavator has when an auger is attached is reach. This reach can be used to raise the auger over obstacles such as shrubs, fences or holes. An excavator can be used to get an auger where it needs to be without disturbing the ground around it. The ability to reach farther can also help operators tackle tough jobs, such as reaching an area from the side of a road, instead of driving on uneven ground.
Typical auger attachment dig depths can reach about 60 in., with extensions available to dig deeper. Auger attachments can typically use bits from as small as 6 in. to as large as 42 in., depending on model and some models take both round and hex bit shafts. Drive options available include direct, chain and planetary.

If this doesn’t happen, the hoses must be interchanged. In some cases, the auger will still turn in the right direction if hooked up improperly, but the performance will be extremely poor and excessive internal backpressure will be placed upon the auxiliary hydraulic system.

Auger attachments, with mounting frames, can range from about $1,300 to more than $3,000. There are many styles of auger bits available on the market. Small, light-duty bits start at about $200, while larger rock bits can cost close to $2,000.

Keith Gribbins is managing editor of Compact Equipment, based in Brecksville, Ohio