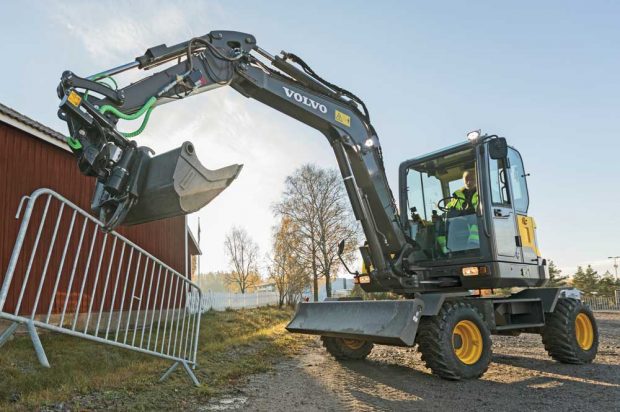 Wheeled excavators are not new machines. In fact, they’ve been quite popular in Europe for some time and are gaining a slow but steady following in North America thanks to their ability to travel from jobsite to jobsite all on their own. Their high travel speed (with some models getting up to 25 mph) is a big selling point over their tracked counterparts.

“If the job requires covering large distances and a mix of on- and off-road work, an owner or operator should consider a wheeled excavator,” says Jay Quatro, field application and training specialist for Wacker Neuson. “One large segment of the market for Wacker Neuson are municipalities. The versatility of a small mobile excavator and its ability to travel on paved roads in a single lane of traffic can drastically reduce transportation costs. In many cases, it can eliminate the need for a separate truck and trailer combo to haul it around the town or village. Once at the worksite, the wheeled excavator can operate in a single lane of traffic or on the shoulder, reducing lane closures and traffic backups.”

In addition to municipalities, wheeled excavators are proving useful in road construction, landscaping and ag applications and on golf courses and in cemeteries. These machines are also a perfect fit for congested urban areas.

Aside from their ability to travel from point A to point B, wheeled excavators offer a whole bunch of other advantages, especially when it comes to visibility and maintenance.

“Since wheeled excavators are predominantly designed to be on streets more often than on undeveloped terrain, they are typically designed to have better visibility and boom options that allow operators to keep a stable and safe weight when driving from jobsites,” says Rodolfo Sosa, product specialist and sales trainer for Hyundai Construction Equipment Americas Inc. “Wheeled excavators typically need less maintenance compared to their crawler counterparts due to them having fewer wear-and-tear parts from not having any chains, sprockets, rollers, etc. On wheeled excavators, you have to maintain the tires instead of worrying about maintaining crawler tracked moving systems. Additionally, tires do not damage finished surfaces as a crawler excavator would.”

One way wheeled excavators are gaining traction in North America is through more and more machine makers introducing more models. With options from manufacturers such as Wacker Neuson, JCB, Caterpillar, Hyundai and Volvo, there are plenty of wheeled excavators to choose from.

Wacker Neuson has two wheeled excavator models in North America — the EW65 and EW100. These 6.5- and 10-metric-ton units are packed with features just like the company’s traditional excavator lineup.

According to Hyundai, its conventional tail swing R55W-9A wheeled excavator can take on many difficult jobs thanks to its excellent over-the-side lifting and slew performance. Bonus: Hyundai’s Hi-Mate telematics system is a standard feature on this model for five years.

“With a maximum dig depth of 10 ft, 10 in. and a reach of 19 ft, 11 in., the EW60E is a fit for most applications,” says Matthew McLean, product manager of excavators for Volvo Construction Equipment. “Digging forces include breakout at 9,736 lbf and tearout at 6,474 lbf. The EW60E’s deck can rotate 360 degrees, allowing operators to reposition the excavator without physically moving it, as is required by backhoes. Its ground-level service access makes it easier to maintain, and the attachment versatility allows the machine to complete a wide range of tasks. Beyond our compact model, Volvo has one of the most extensive lineups of wheeled excavators on the market. Our seven models range from the EW60E up to the EW240E Material Handler and include two short-swing models for work in tight spaces. We also have contracts with government cooperative purchasing organizations such as HGACbuy and Sourcewell.”

The Hydradig from JCB features 360-degree visibility, allowing an operator to see each tire and get closer to objects they need to lift, move or dig. Baker says that the machine’s visibility fits perfectly into the company’s safety initiative.

“An operator is able to generate a much better safety profile with our Hydradig because of its visibility,” he says. “You’re also going to find that we have a unique engineering design with the Hydradig. Mobility and maneuverability were a huge priority when this machine was designed. This machine is made to be moving upwards of 13 mph with full hydraulic function. This makes the Hydradig an ideal machine for municipalities that might be doing grass cutting along the side of the road. You’re able to operate a large flail mower off the side of the road while still moving, which is a huge advantage.”