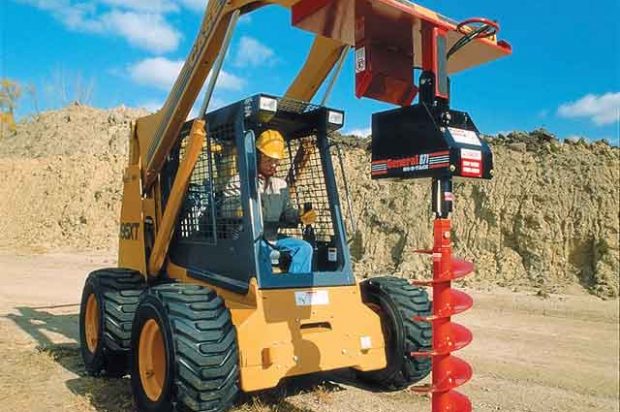 Hydraulically powered earth augers are one of the most popular attachments available for skid loaders, mini excavators, backhoes and compact loaders. Their power, productivity and ease of use have made them a go-to solution for both small- and large-scale digging projects. But given their simplicity and dependability, these hole diggers often aren’t given much thought.

However, earth augers do require a certain amount of attention when it comes to operation, despite their basic and rugged design. Although these products are meant to boost the productivity of the machines they’re attached to, productivity suffers when hole diggers aren’t used or maintained properly. Fortunately, auger attachment operators only need to remember a few simple rules.

Go with the Right Flow

The first step in ensuring an earth auger will perform as desired is to verify the attachment is compatible with its power source. The skid steer, backhoe loader or mini excavator must have adequate hydraulic flow and pressure ratings in order to provide enough power to the attachment. If the attachment is compatible, the operator must also be sure to plumb the hydraulics correctly. After the hoses are hooked up, activate the hydraulics to ensure the auger rotates in the proper direction. If this doesn’t happen, the hoses must be interchanged. In some cases, the auger will still turn in the right direction if hooked up improperly, but the performance will be extremely poor, and excessive internal backpressure will be placed upon the auxiliary hydraulic system.

A Bit of Advice

Before an operator starts digging with an earth auger attachment, he should first check the condition of the wear parts, such as the screw bit and teeth, to ensure the attachment will perform at its best. The screw bit or pilot point is the very tip of the auger. It’s critical that the screw bit is in good condition because this is what keeps the auger tracking straight during use. Unfortunately, it’s not uncommon to find earth augers in rental centers with screw bits that are either completely worn down or, worse yet, gone completely.

Using an earth auger without a screw bit would be like trying to use a broken drill bit to drill a hole into a piece of steel. There’s nothing that’s going to allow it to track straight. This not only significantly reduces equipment performance but also raises safety concerns for the operator.

Making sure the auger has adequate teeth is another commonly ignored maintenance issue. The teeth, located at the bottom of the auger flighting, are primarily responsible for digging, whereas the flighting is designed to push the loosened dirt up out of the hole. When the teeth are in good shape, the auger can aggressively and efficiently dig in most materials. But if the teeth are worn down or missing, the stress is then placed on the auger flighting to do the digging, which severely limits performance and creates another wear issue.

All augers are designed to have a certain amount of wear clearance. Consider, for instance, an 8-in. diameter auger. When the teeth are new or in good repair, that 8-in. auger will dig a 9.5-in. diameter hole — allowing the auger to be easily removed from the hole it just dug. As the teeth wear down, this 9.5-in. digging diameter decreases. If left unchecked, this digging capacity can decrease down to the nominal diameter of the flighting (8 in.), and the flighting itself is now doing the digging — not the teeth.

Long term, the flighting will begin to wear down and start to taper, eventually looking like an ice cream cone. Once this point is reached, the auger will fail to dig straight holes and will commonly get stuck in the ground. One reason this problem exists is that many earth auger owners don’t know what to look for to determine when the screw bit or teeth are worn out. Therefore, some manufacturers have developed wear indicators that provide an obvious visual indication that these parts need replacement. 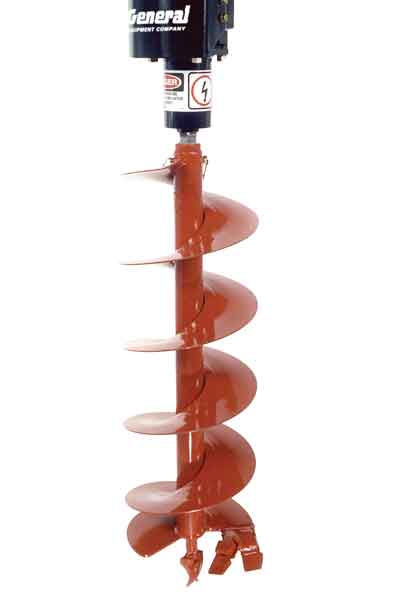 Call Before You Dig

Once the equipment is ready and the operator is confident about using it, consideration turns next to jobsite location and conditions. Any digging project could grind to a halt quickly if the auger happens to strike an underground utility line. Therefore, always call an underground locating service before digging to identify the whereabouts of buried lines.

Even if a jobsite is free of buried cable and utility lines, there still may be natural obstructions like rocks or tree roots.

Dense varieties of soil like soft shale, hardpan and caliche could also present an obstacle or necessitate additional power to dig the hole. Always know the limitations of the equipment. Stubbornly attempting to force an earth auger through tough soil classifications is not the way to get the job done. Grass and other overgrowth could also hamper an auger’s digging ability by clogging the auger blade and screw bit, and therefore should be removed to increase efficiency and overall productivity.

Additionally, normal use for a hole digger is on level ground. Other digging terrains can be dangerous and should be avoided. If a hole must be dug on a slope, make sure the power source has adequate footing and stability and use outriggers or other stabilizers when available.

Ideally, an operator will always enjoy a smooth digging experience, but over time the art of digging a hole has produced a fair share of poor ideas that continue to persist. One example is the misconception that the best way to attack a large diameter hole is to start by digging an initial hole with a smaller “pilot” auger, and then follow by using a larger auger to ream the hole to the desired size.

In actuality, this method will not allow the auger screw bit to produce sufficient directional stability for the larger diameter auger during this reaming process. In addition to being ineffective, this procedure could result in equipment damage or even injury. Furthermore, operators must be careful to not push an earth auger too hard, which could damage the hydraulics. It’s important to understand that with a hole digging application, the hydraulic system is constantly being taxed during the entire process.

When digging a hole, the earth auger is always working at maximum output, and this process generates heat. If the auger gets stuck and the operator continues to push the machine, more and more heat is generated and, eventually, something has to give. This typically means the bypass valve has to open to redirect hydraulic oil flow, which in itself creates a lot of heat. Eventually, as the hydraulic oil heats up, its viscosity breaks down and premature pump or hydraulic motor failure is likely.

After a hole has been dug successfully, an operator must then choose how to remove the auger. To minimize the amount of loose soil that remains in the bottom of the hole, the operator should stop the auger’s rotation before removing it. On the other hand, the auger will retract with less effort if allowed to rotate at a slow speed — but more soil will be left behind. Following these tips, you can achieve more productivity from an earth auger attachment, and you can avoid experiencing the downtime you fear. Fortunately, the steps are as basic as the equipment itself, so you can successfully use a hole digger, rather than digging yourself into a hole.

Dennis Von Ruden is the president of General Equipment Co.