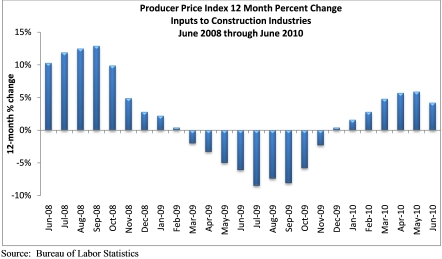 Finally, there’s some relief in the price of construction materials. After three months of increases, the price of construction materials and supplies in June fell 0.9 percent, according to the July 15 producer price index (PPI) report by the U.S. Labor Department. However, prices are up 0.8 percent for the second quarter of the year and are 4.2 percent higher from June 2009

Most commodities tracked by Associated Builders and Contractors (ABC) posted decreases for the month. Iron and steel prices were down 2 percent in June, but are still up 3.8 percent for the second quarter and up 34.2 percent on a year-over-year basis. Similarly, steel mill product prices were down 1.3 percent last month, but are 2.1 percent higher for the quarter and up 30.5 percent from the same time last year. Nonferrous wire and cable prices were down 2 percent for the month and 2.1 percent lower for the quarter, but are still up 13.6 percent over the past 12 months.

A 2.7 percent spike in natural gas prices caused crude energy prices to increase 1.7 percent last month. Crude energy prices are down 9.2 percent for the quarter, but are 6.4 percent higher from June 2009. Overall, the nation’s wholesale prices dipped 0.5 percent in June, while core finished goods prices — minus food and energy — were up 0.1 percent, the eighth straight monthly increase. Year-over-year, finished goods prices are up 2.8 percent.